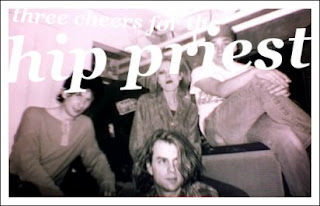 One day, maybe in eighth grade, I was listening to a Pink Floyd record and realized how much I hated it. I sold all of my classic rock, bought a bunch of used punk CDs at the mall and felt better; all things considered, the first US Bombs and Dropkick Murphys albums were pretty right-on for a disaffected ninth grader, but what happens when turning into a way-disaffected tenth grader? I didn't really "get" all of the tatoos and shouting. Anyway, Janeane Garofalo hosted a show on Mtv called Indie Outing, which always played a wonderfully piece-of-shit Superchunk video and still-amazing Yo La Tengo one, which, in about a month or so, sucked me into Matador Records.

It's been a painful relationship. The dreary electronica of the late-90s. Guided By Voices records becoming focused. Interpol. Even though they're putting out the new Interpol record yet again, Matador's been getting back into the brainy / weirdo indie rock they established themselves with, which is very exciting for me, and the 21st anniversary weekend they're holding this October-- it's killing me. It's just too good. I'll never get there. I'll consider giving you handjobs for planefare. But, since the mere act of typing things onto the internet makes them true, the rumors of the completely unconfirmed Dustdevils reunion (U.C. exclusive!) are really just too much for me to handle; Dustdevils in 2010, oh my goodness!