Taylor Swift, Making a Career out of Playing the Victim 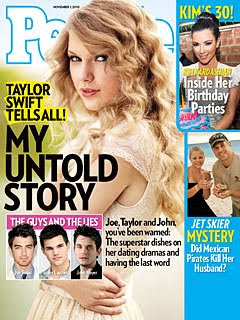 "I will say everything in my music," says the 20-year-old country star. And the past two years of her life – a period that included failed relationships with Joe Jonas and Taylor Lautner (and, apparently, some drama with John Mayer) – gave her plenty of material for her emotionally charged new album Speak Now, out Oct. 25.

Kanye West might always find (yeah), always find something wrong, but to my knowledge he has never released a song that was a hit-piece against someone specifically and readily identifiable, much less an album full of these sorts of songs. 808s is pouty, but doesn't strike me as retaliatory. Who was "Heartless" about? I don't know. But this edition of People is naming like three or four dudes who Swift is ALLEGEDLY commenting on, not by name but with tell-tale details, including another ALLEGEDLY girl one of her ex-boifs dated, who so ugly she wear an "ever-present frown." WTF.

This piece is satire and the person I am allegedly referring to is not Taylor Swift the musician but actually another person named Taylor Swift and I only accidentally attached the People Magazine cover, and I can't figure out how to take it off. Also the Kanye West I'm referring to is a local grocer.