'black swan' is kind of a mindfuck

Okay so it really just is a mindfuck. I mean, this film was easily the most disturbing, jarring thing I have seen in SOME TIME. from the camerawork (which is awesome) just to the shot of the all-too-frail ballerinas ("MOM I CAN'T EAT THIS CAKE!" "THEN WE'LL JUST THROW IT AWAY!" "NOOO!") it's beautiful but it's unsettling. and like Inception, you end up with more questions than anything by the time it's over. the film is a ride- much to my chagrin, I had my face in my hands for part of the end (so! much! blood!).
Also, question: do we have so many dreamlike movies now because we're gradually becoming disconnected from reality? just a thought! I don't know SHIT about movies. but let me tell you about what I do know:
- Winona Ryder, playing the aged ballerina force into retirement. we force encounter Noni (my middle school idol- conjunction junction, what's yo function? ...) when Natalie's character Nina is prepping outside her dressing room. you hear a lot of throwing things and shit going down and it's obvious Nina, in her pretty little head, is thinking LINDSAY LOHAN WHY ARE YOU IN THERE?) but no OUT COMES WINONA FUCKING RYDER
WHO YELLS WHAT at poor Natalie and storms away. Winona's character is so, so creepy. like she has a right to be as angry as she is (big font!) but she still leaves a bad taste in the viewer's mouth. not giving away what happens to her, just saying, a supporting actress Oscar nom would feel justified to me?
then there's Barbara Hershey, who is just as scary as Natalie/Nina's overprotective mom who cuts her daughter's fucking nails for her- I am not sure how old this girl is supposed to be, let's say 24. ... yeah. apparently the Babs put her own career off for her daughter and is still bitter about this, but just as obsessive. man, what was the last movie SHE was in? Beaches?
as little as I know about movies I also can claim to know for ballet (font! font!) so the plot of the film (I haven't said it HAVE I) is Nina gets the coveted SWAN QUEEN role in Swan Lake. so she throws herself into the roll. if the movie is a parable it is a parable against the dangers of seeking perfection. don't fly too close to the sun Icarus etc.
Mila Kunis is (apparently) her rival. could be transcendant role into more serious work, I don't know. she sort of nails the whole I'M THIS BALLERINA FROM SAN FRANCISCO THAT DOES DRUGS AND HAS TATTOOS AND SHIT and oh goddddd she is so hot in this movie like Natalie Portman is beautiful and exquisite but Mila just oozes sex appeal. here I need to post a photo: 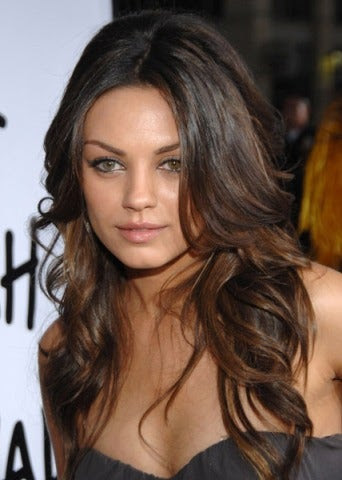 they have sex, which I thought would be extremely amazing like porn but BETTER but instead it kind of freaked me out. because this whole film has this dark vibe to it that disorients you. but then I watched their sex scene again on the internet and I approve now :P.
There's also this foreign dance instructor guy she's a little in love with, but I think I felt he was underdeveloped or underappreciated or undervalued or something with "under" in it.
I'm sure you know by now, if you've been paying attention to any better or more adequate reviewers, that it's debatable if Mila is out to get Natalie because she's the star and etc or if it's all just going in Natalie's head. or if Natalie is possessed by a demon! but the whole last part of this film: HOLY SHIT.
Nice work, Darren Aronofosky! I was never once bored with this and flinched many times and thank god I am not a guy and don't have to worry about my reactions to things! ha!
final thoughts:
- see this movie see this movie SEE IT (especially if crotchgrabbing doesn't bother you)
- please do not be a pussy like I am and hide your face during some scenes (but you will know what I mean).
- Mila Kunis OH MY GOD
- Natalie Portman please get an Oscar.
- Winona Ryder probably does hate her because now Natalie is taking her roles. FOOD FOR THOUGHT
on a scale of 1 to 16 I'm gifting this a 14.6. ho ho ho!