May 27, 2011
I guess the best part of a Lady Gaga album is anticipating it. Like, oh, what is that crazy ass bitch going to do next?


I said this before and I will say it again: LG really isn't that groundbreaking. She's taking stuff a lot of other artists and musicians (David Bowie to Madonna to Roisin Murphy and Grace Jones and back again and reverse keep doing this please). The big deal with her is she's a huge mainstream pop star and she has a devoted crazy scary drooling following of little monsters. Am I a little monster? que es, I don't really know.


So I just moved to New York City, did you know that? I'm still in awe. I get up in the morning, see the Empire State Building, think about pooping, and am like "wow, for once I'm not living in the suburb of the fourth largest city in Pennsylvania." and then people are like I HOPE YOU STAY THERE and I wonder why I call them friends. shrug. Lady Gaga gets better support from her monsters.


One thing about New York:  LADY GAGA IS EVERYWHERE. EVERYWHERE. I'm still getting used to those big construction sites where people plaster posters everywhere. I have seen so many pictures of Lady Gaga's brilliant and scary face, staring at me from them. And I've stepped away, lest I be judged by this shark-woman.


She was also at:
- Good Morning America
- Best Buy


I went to Best Buy to find her the other night. What I did find were her fans and her producer. And her fans were running around in traffic and stuff and there were these British women that were like BLOODY HELL WOT'S GOING ON. No LG. NYPD told me to back off. I was like Ke$ha wouldn't do this shit, she'd just throw up on someone.


"Marry the Night" is a cool idea but I'm not too taken with the song itself. It seems boring and vapid. I can't say this about the rest of the album, but "Marry the Night" just seems blandtastic to me. Like why isn't it on a Kelly Clarkson album? sigh.


You know I love "Judas." It's like cereal with pieces of steel in it. Moving on.

"Government Hooker" is amazing. JOHN F. KENNEDY. I don't know what it means. Should we even try to decipher Lady Gaga's message here? At least she's trying to have a message, but don't get too cryptic gaga. You are fun but you are also the result of style over substance and somewhere Madonna is watching you, scratching her chin and going "hmmmmm."


Okay, so "Americano" is kind of interesting, too.


Cara:  but now i think about her all stoned, writing shit
kinda makes me laugh
I couldn't have said it better, my friend. She seems to be making a sign towards American immigrant relations here. Okay bitch, I know what you mean. Get in my minivan and follow me to Mexico; here we will eat the magic peas.

When I hear "Hair," which again I don't know what it means again is this like a reference to the musical or what, I think of Michelle Obama FINALLY meeting Princess Kate and being like "LOL SHOW ME PIPPA."


Lady Gaga is sure one to sing about hair; does she even really have her own hair anymore?


more highlights of Born This Way as follows:


- she's trying to speak German
- she's channeling Berlin-era Bowie there. nice!
- I feel like I fell down some rabbithole to some glittery over-the-top futuristic Caberet-inspired gay paradise. and someone's giving me a lot of club drugs.


DID SHE SAMPLE ROYKSOPP? WHAT? 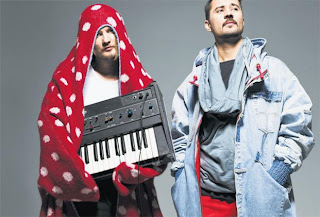 
it's funny he dresses like that because I do too!


one song, by Lady Gaga, which I will think of later when I am trying not get lost on the subway, is "HIGHWAY UNICORN." oh, GOD.


"You and I" is somewhat ballady in a Pat Benatar way, who LG reminds me of at random moments.

overall, this album tends to not be as scary as I thought it would be. Even with a title like "Bloody Mary" and "Edge of Glory" being a whole bag of mehhhhh. She's experimenting, playing around with genres like dubstep and club, doing lots of drugs, making me want to do drugs with bunny rabbits, is this Boogie Nights or something else? Well...

Unlike a pop star like Jessie J, though, Lady Gaga HAS her niche. She has her style. She's not borrowing crazily left and right from her contemporaries. She's not like, a dash of Rihanna here, a speck of Taylor Swift there. Even though she seems to take her inspiration from everything and everyone else, and sometimes I'm like WHOA DIDN'T I SEE THIS BEFORE IN 1986 WHEN I WAS JUST ANOTHER CHARACTER IN A BRET EASTON ELLIS BOOK?

WE PLAYED "POKERFACE" SO LOUD


it's still fun to listen to. so campy, so over the top. It's best listened to at 2:35 a.m. when you are on a lot of drugs and energy drinks and sitting in the middle of a neon light. Bring out your plush unicorn; HAVE YOURSELF A GOOD TIME. Please do not try to look for substance! If you do, you will be just be more confused than my dad after watching Glee by accident. Let's not go to there.


Lady Gaga, thank you for giving me the courage to be me. I think Lady Gaga would tell me "WELCOME TO NEW YORK, BITCH."


love,
Susan B. Anthony's ghost
who wrote this review


USELESS CRITIC RATING:  A SOLID B
B+ FOR EFFORT
SIX JAMES MURPHIES SHORT OF ONE NATALIE PORTMAN