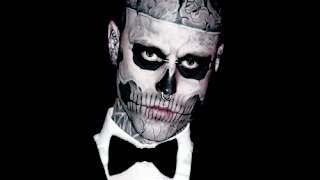 This might come as a surprise, and it is even a surprise here, that this guy takes the number 3 spot ahead of the 2011 Miss Trinidad and Tobago.

He goes by many names: Rico the Zombie / Zombie Boy /Just "Rico" /and of course Rick Genest.

In 2011, he launched his way into the world of fashion and art after working with director, Nicola Formichetti. The Canadian, Rick Genest, strolled into Music Video Acting alongside Lady Gaga, and his thoroughly tattooed image spread around the world.

Rick Genest holds a special place on this list. For starters, it's safe to say that he is the only male; however, there is something else that puts him over the edge than many of the other hot rising stars.

Yes, it is that obvious; it's the tattoos. 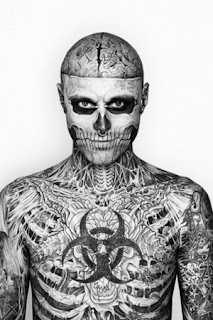 Rick Genest is an example of how the overwhelming need to fear tattoos is not that necessary. Tattoos are an art form, and they are also a form of personal expression. When you see workers in restaurants and stores with cover up, bandages, or even sometimes napkins taped over their tattoos, do you ever wonder why there is such a phobia or dislike of this type of body art?

Many people even rule out facial tattoos altogether, for they feel it will limit their prospects in life.

Rick Genest is a prime example of how the art form of tattooing is just that...an art form. He is also an example of how people with full body and facial tattoos can excel in the world and are not subject to "limited prospects."

Maybe the tides will soon turn.

He even has his face on a longboard #Respect. 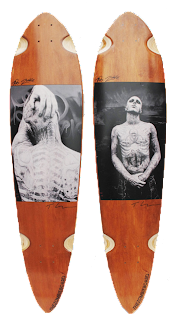 QATFYG:
Would you ever have a facial tattoo?

(I bet some people read every word of that question except "tattoo.")