A 1001 Movies We Will Never See, Liz and Britt's Journey Through Cinema Treks On with The Avengers


So we are reviewing the Avengers a quarter century later than everybody else. Sue me. This was how it went trying to convince Liz to see the Avengers.

Me (the homelier of the two of us, aka the Jackie Chan of the pair):  “So, let’s see the Avengers this weekend. I hear it is quite good.”
Liz:  “My aura is red this weekend and I think this weekend is a mauve with hints of burgundy.”
Me:  “WHY CAN’T YOU SPEAK ENGLISH AROUND ME.”
Liz:  “No habla Ingles.”

It happened then that we spent last weekend in SoCal with a few mutual friends that we went to go see it. I guess I have become the kind of person who, when on vacation, removes their rolled-up shorts from their crotch, insults the locals tongue-firmly-in-cheek and asks about the location of the nearest Chili’s so I can get my virgin martini on. And goes to movies.

What of the actual film though? What of Marvel’s last gift to us before we have to sit through The Amazing Spiderman and OKAY SERIOUSLY WHY IS THERE ANOTHER SPIDERMAN MOVIE COMING OUT DIDN’T TOBEY MAGUIRE KILL THAT SERIES PUT A STAKE THROUGH ITS HEART AND LET IT DIE.

I grew up reading comic books. Not often that I can be considered a comic book nerd or know anything seriously about the genre as a whole, but there’s a soft spot in my cold cold heart for them. So was I familiar with the concept of the Avengers beforehand? Yup. Although I confuse them a lot with the Fantastic Four, which was one of my absolute favor comics and kind of, um, sucked as a film series. Apologies to Jessica Alba:  you put out an admirable effort bb girl! (haha put out)

The Avengers definitely had one of the best opening sequences of any film I can recall seeing in recent memory. Like just the build-up was absolutely incredible. When creepy-creepy-CREEPY ass Loki shows on up on Earth and Samuel L. “Oh Hell Nawhhhhh” Jackson does what he does in imaginably every film. But by the moment the title hits the screen, well, at least I was blown away. Liz and my new friend in Emily, despite the fact we had 3-D glasses, were probably planning their next trips to the Gap or whatever other people think about.

The story is as this, friends, let’s Reader Digest this shit:

Loki comes to Earth from some other universe. One can imagine this is the Loki of Norse myth, but let’s not kid ourselves into thinking I know anything about this stuff. I do NOT. Well there’s some kind of laser crystal time tamarack thing that he wants so he can get power and enslave the people of Erf because freedom is secretly our enemy (not to get metaphysical on you or anything like that)…

The Avengers are assembled from all known corners of the globe to combat this, uh, threat. And from what I gather, not having watched any of the respective previous films (Captain America I would watch just for Chris Evans, I sorta fell in love), they are all badasses. Robert Downey Jr.’s playboy devil-may-care smartass Iron Man, most notably. Mark Ruffalo stands in for Edward Norton as DA HULK, because unlike Norton, Mark Ruffalo is not a pussy. And you might be tricked into thinking mild-manner and perpetually uneasy Dr. Banner is a pussy, but guess what! He gets angry and is no fun to be around. I was reminded of my father at those points.

Rounding out our group of slight misfits is Thor, from another planet, also starring in Snow White and the Huntsman (which looks droolworthy, if I may employ that term once!) and ScarJo, who is just as gorgeous as we were led to believe. I’m not sure if she had a superpower other than being gorgeous. I mean, really. The woman is unreal.

Now I am not always gung-ho about action films. Really, I rather put broken glass in my vagina than watching anything with Jason Statham. However, maybe it was Joss Whedon’s knowing directorial prowess that made the Avengersjust so enjoyable to me. It was bombastic, it was whip-smart, it was cheesy, it was fun! All in all, an ungodly amount of money well-spent. I think there are certain reasons one goes to see a superhero action film. To be thrilled, to be inspired, to be just delighted to pieces by good old-fashioned explosions and hot girls in clingy clothing and all-American purveyors of truth and justice ™ asskickers.

The Avengers marvelously accomplishes all. I spasmed every few seconds, grabbed the nonplussed LizRo’s arm to utter “THIS IS SO COOL! OH WOW OH BOY OH BOY!” while she mulled on the cardigan she’d pick up from the Gap’s summer collection in the weeks that are ahead.

This is a film to be seen in theaters, FOR REAL. Don’t pirate it on your computer. If you do then you are stupid. Although, I did spend like 20 dollars on this. And about two hours of previews.

The back-and-forth between all the characters makes the times when the plot seems kind of contrived, unbearable and a little hard to follow soooooooo worth it. It’s so slick and witty, it’s like the perfect dinner guest!

And you know who surprisingly was awesome in this film? Gwyneth Paltrow! Enough said.

The movie is pretty long and that’s one part I wasn’t so big on. Also, when the final catastrophic fight occurs, it is in New York City. Epic and badass? Maybe. Redundant? A lot. It’s not that I don’t understand why movies always choose to tear apart like, NYC and Chicago and LA and London, I totally do!

That being said:  why can’t we destroy Detroit for once? I mean, like, even if the Avengers came out the losers, everybody would win because a city like Detroit (or Cleveland or Buffalo or Des Moines) would simply not be missed. Oh, man. Erie:  please petition to be in a superhero film. Same to you, Youngstown.

Well, regardless. Another applaudable touch was the aftermath of the showdown between Loki and the Avengers. I sort of like- and you’ll have this in the Dark Knight too- the idea of a sort of superhero showdown in our CNN world, with the constant news coverage and all. Thumbs up! LizRo has told me my review is nauseating, I think she’s just pissed I know about her Gap fetish. Thumbs up!

So the Avengers will arguably not change your life, your perspective, your thoughts on society. It’s no Rust and Bone, friends. But you know what it is? Mindless fun! GOD BLESS AMERICA!

LizRo:
I’m not a big fan of sci-fi slash action films, so I probably had no business seeing The Avengers in the first place. But, Brittany was stoked—“It has ScarJo in it, Liz.” And, anyway, I’m becoming a whore for errthang pop culture. I couldn’t care less about these things—the movies, shows, and events that I know nothing about—but it’s like my own personal social experiment: investigating what the general public is currently crooning about.

Brace yourselves. I DIDN’T LEAVE THE THEATER FEELING LIKE I HAD BEEN ROCKED TO THE CORE BY THIS FILM. I’d apologize, but I would never. If you can handle that, read on. 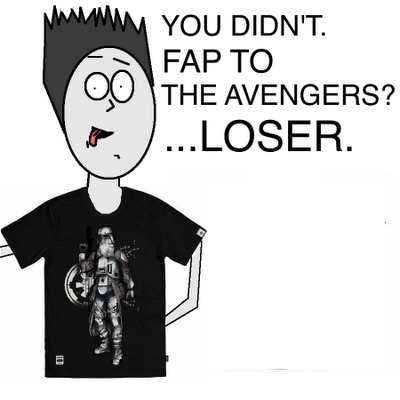 So, we saw the film in 3-D. It was vaguely reminiscent of Avatar, which I also saw in 3-D, except that Avatar left me in a post-orgasmic state. (Some have argued that Avatar’s storyline too closely resembled Pocahontas’, but that’s another review. As far as I’m concerned, Avatar was inarguably visually stunning.) ANYWHO. 3-D. I looked over at Brittany, who was wearing two pairs of glasses and clawing at the air in front of her. 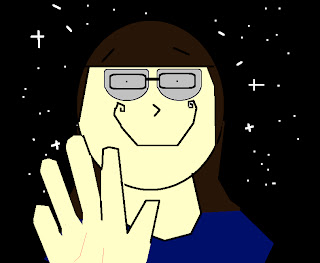 From the beginning, this girl was impressed.

Let’s start with the antagonist. “Loki.” The name is just bad enough to give any comic book enthusiast a raging hard on. This villain looked like a tampon with horns, i.e. Zelda from Power Rangers.

Scarlet Johansen’s superpower? Achieving the perfect shade of summer-whore auburn. ScarJo rocked some ginger locks in this role. And I couldn’t get behind 'em. 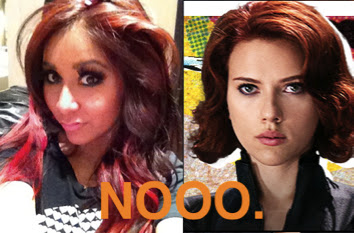 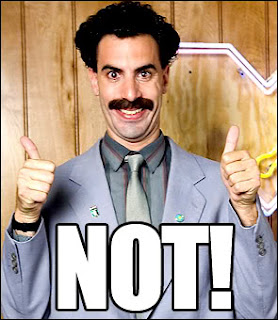 Gwyneth Paltrow, on the other hand, was a highlight. She played Iron Man’s lady, and was one of the more believable aspects of the film. Not surprisingly, the cynical Iron Man, played by Robert Downey Jr., was my other fave.

Also, I have a “thing” for Mark Ruffalo. I like him a lil scruffy.

Whatever. Guilty pleasure.
Back to my thoughts on the film. I make this awesome spinach dip. Here’s my secret: I follow the recipe on the back of the Knorr’s spinach dip package. That was The Avengers—formulaic. Insert clever punchline here, add a few helicopters—the official signifier of a government operation—sprinkle in some explosions, some special effects... I haven’t seen so many cliches since the last episode of The Pitch.
As for all movies, The Avengers had an opportunity for to bring something to the table. Instead I kept thinking, “That was hokey.” Then I’d look over at Brittany who was dancing in her seat, mouthing, “SO. GOOD.” So, you know. Two different takes on the film.

Still, you might as well see it—if you haven't already. Everyone else has.