plus the one in my brain 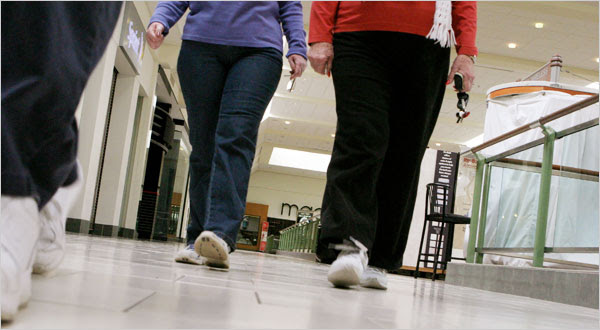 so for my nonfiction project I'm doing a story on mallwalkers. which has been unexpectedly difficult. you don't think it would be- but my social anxiety flares up like, I don't know, the sun when it's storming, because they all look so determined and GOD FORBID I approach them when they're in their fitness zone! they're not the most friendly people. in fact, they're kinda intimidating.

anyway, I was offered a ray (in keeping with solar metaphors) of relief when I discovered my friends' parents are mallwalkers. so last night they initiated me into their mallwalking world. and you know what? I sincerely enjoyed it. most definitely. the crowds of disgusted teenage mall goths did not bother me for a second. we had a good time together. I secretly enjoy the Millcreek Mall, for the absurd amount of time I've spent there in my life. it almost feels like my second home. which is gross to think about. erg.
you think by now I'd be on a first name basis with the baristas at Starbucks...but I'm not. I was at the library, though. when it was there. good times. I'll walk to the new one when the weather stays warm.

I'm going back tomorrow morning. break of dawn; I swear! what music do you think would be good for mallwalking? BEIRUT? did you know you can stream his new album at last.fm (here: http://www.last.fm/music/Beirut/March%2Bof%2Bthe%2BZapotec%2B%2526%2BRealpeople%253A%2BHolland and it's growing on me!)
I've been searching to see if any mallwalkers keep blogs. I don't think they do. I'd like to get inside the mind, pick the brain of one of those older people I see in the mornings. because I feel like it's the highlight of their day. maybe tomorrow! maybe they'll see me, a young person, and be inspired to talk. or maybe not, because that's what usually happens.
in other news, Mr. Josh Ritter will be in Pittsburgh on Sunday, March 29. Now if I could drive myself some place and/or find a travel buddy THAT is a show I'd hit up. "The Historical Conquests of Josh Ritter" is also totally streamable at my favorite website: http://www.last.fm/music/Josh+Ritter/The+Historical+Conquests+of+Josh+Ritter - I recommend "Right Moves" or "To the Dogs or Whoever" (of course).
speaking of websites, does anyone else have trouble with de HYPE MACHINE as of lately? I am- and I hate to say this, again, but it's like New York in that it's bringing me down.
- Brittany
p.s. potentially my newest favorite song: http://www.youtube.com/watch?v=RST4R1CEgLQ
YES I know it's old but I don't think I was able to grasp the greatness of Röyksopp until I was listening to them nonstop while I finished my journalism paper. THAT ALBUM BY THEM IS ALSO STREAMABLE ON LAST.FM- "MELODY A.M."- OH GEEEEEZ