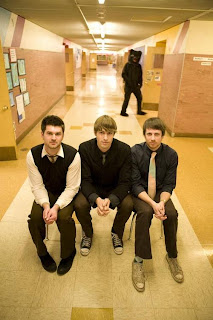 This guy is playing in Corry, Cameron Carpenter, and he seems VERY cool. tonight. United Methodist Church. I'd go, but I just found out like, five minutes ago. so that kind of impairs me, being transport-less and miserable.
who does not love a good pipe organ??? (esp. one played by a ROCK STAR?)

Radio Empire's show @ Forward Hall w/ The Romantic Era (did I go to high school with you guyz?) & Talk About It:
http://www.myspace.com/radioempiremusic
6:OO P.M!

THEN, tonight, in Allegheny (College), you have THE ANTLERS. and I would have TOTALLY gone if I didn't make PLANS for tonight. so here:

Lastly, you have the recently announced Cowboy Junkies show for Mercyhurst on June 21st.

though I'm secretly a big 10,000 Maniacs fan and they sound alike to me, I've never quite gotten into them. hmmmmmm. but seeing as I'll be alone for most of the summer, why the hell not.

And now onto non-touring bands....
here's a band I discovered by accident yesterday thanks to hype machine: Derby.

very accessible sound. keep an eye out for them. or ear.