April 28, 2009
Last night I went and saw Sunshine Cleaning, the new film starring Amy Adams and Alan Arkin. The film is about a woman named Rose (Adams), who starts a business with her sister, which requires them to clean up the blood and ooey gooey sticky parts from crime scenes. All the while their nutty father (Arkin) runs around with crazy schemes and paper-thin promises. Oh yeah and some other shit happens in the movie.

I went into the theatre with quite a lot of expectation for this movie, and I walked out thinking, “Eh, it was okay.” It wasn’t a bad film, but at the same time it didn’t blow me out of the water like I hoped it would. First of all, I thought the film was going to be funny, and I only laughed four or five times in two hours. 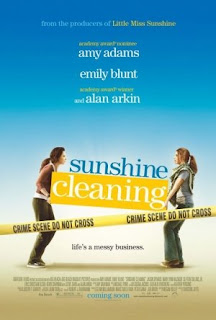 Don’t get me wrong. Sunshine Cleaning has its moments, but it didn’t totally win me over. Amy Adams is great at everything she does. She is always the darling of my eye. As for Alan Arkin, only one thing came to mind. “Little Miss Sunshine” is over. Of course Arkin was fantabulous in that one, which he one the Oscar for, but he played this character the same way except without the hilarious obscene one-liners that made the “Little Miss Sunshine” role so epic.

Come to think of it both movies are similar, they both have down-on-their-luck dysfunctional families trying to find common ground. But LMS is FUNNY!!

Also check out the actress, Emily Blunt, in Sunshine Cleaning. She gives a good performance.

QATFYG: What is your favorite Amy Adams role? What type of role would you like to see next for Alan Arkin? And have you seen Sunshine Cleaning yet?