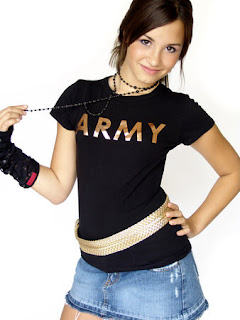 So I was watching the Disney Channel a few days ago because I'm cool like that, and I saw that every other commercial was about this girl named Demi Lovato. No joke. It flipped from old commercials about Camp Rock (which I didn't see), to ads for As the Bell Rings, to an interview with her promoting her new animated film Tinker Bell some something (She's the lead voice), to her international music tour,to her new movie Princess Protection Program, and of course to Sonny With a Chance. (YAY)
This isn't the first time I've mentioned her on the blog, and the last time I wasn't too kind when writing about her. Then, I saw her on Sonny With A Chance, and found she's actually okay. She does have some decent moments. And she can sing too. But I still wonder that this girl is just cashing in on her 15 minutes. Well regardless I will proclaim that there is a new teen queen/dream on the Disney Channel and it is ME muthafucka. JK it's Demi Lovato. So I encourage all you readers to check out her stuff and formulate your own well constructed opinions about this completely irrelevant topic. And don't feel bad for Miley that she's no longer the Disney Number One Girl....She's still the queen of Wal-Mart

QATFYG:
I recently turned 21 this week, am I too old to watch the Disney Channel? (Not that it matters because I'm going to do it anyway.) And do you like Demi?

Edit: I just watched a recent episode of Sonny with a Chance, and I thought it sucked!! So watch with caution. eep! It may be hit or miss. oooo how mysterious and unpredictable? NOT!!