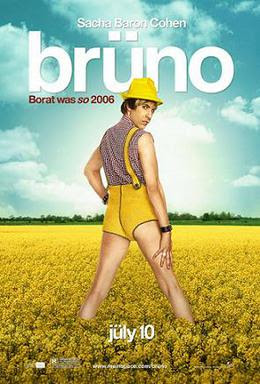 Let's face it, over the last few months it's been hard to avoid the aggressive advertising scheme arranged around Sacha Baron Cohen's new film "Bruno." Bruno in leather hot pants in England! Bruno in an S&M leather get-up with two tattooed skinheads in GQ! Bruno and company in anatomically correct nude-suits at the movie premiere in Germany! Bruno and Eminem! (I think that's all I have to say about that.)

Hell, odds are you don't even need me to describe the events of the film for you. Bruno (Sacha Baron Cohen) is a flamboyantly gay Austrian fashion journalist who is fired after a misadventure at Milan fashion week. Yearning to become famous, he goes to America and tries his hand at acting. Then he does various things and sees various people (and does various people and sees various things) before going to the Middle East. I'll be honest: I lost interest somewhere around this point and I still don't know why he went to the Middle East. Possibly to work toward world peace in another attempt to become famous. He did go back to the US though. He also fell in love with his assistant. And he sang with Bono, Snoop Dogg, and Elton John. I don't know why. Maybe because they're all gay? (Oh, snap!)

When Brittany asked me if I'd be up to writing about "Bruno", I felt somewhat conflicted; I believe one of my early comments was that I didn't find Sacha Baron Cohen's shtick amusing and I thought the film had the potential to set the gay rights movement back 40 years or so. And having seen the film, my opinion hasn't changed... much.

"Bruno" was awful. Full stop. I still don't find Cohen's character-acting entertaining, nor do I take much pleasure in watching people makes idiots of themselves on camera. My fear that the film would set back the gay rights movement was unfounded - if done properly, it very well could have done just that. Instead, the dull plot, overly stereotypical "gay" eponymous protagonist, and thoroughly unfunny scenes lacked the power to make much of an impact one way or another.

Now, while I would like to write "Bruno" off completely as being a worthless piece of

you-know-what, it wasn't. Why? Well, some scenes were worthwhile. For example, take the "peace talk" scene in Israel; it was entertaining and downright accurate - Jews and Muslims SHOULD unite and shoot the Christians! Makes sense to me! Another scene that actually achieved what I would assume is Cohen's goal (of making an ass out of people while simultaneously proving a point) occurred when Bruno acted as an agent interviewing the parents of child actors: one parent was so desperate to have her child get a role she promised to do "whatever it takes" to make her child lose weight - to go from thirty pounds to twenty in a week.

Overall, I'd suggest you save your money and not waste your time on this atrocity of a film. Here's hoping Cohen puts Bruno to rest before some southern yokel really gets out a gun and shows him who's daddy.