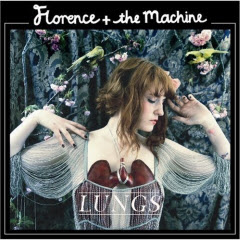 I first heard Florence and the Machine over a year ago, back when the band has less than 1600 plays on last.fm. First I came across "Girl With One Eye" on the Hype Machine, then I listened to "Kiss With A Fist," and then the acoustic cover of Cold War Kids' "Hospital Beds". Every song was amazing. I searched the Hype Machine every week for new tracks - and never found them. Then a combination of events occurred, I forgot about the band, and I only just got hold of Florence's new album, "Lungs," earlier this week.

The band now has over 1.6 million plays on last.fm, a #2 album in the UK (just behind Michael Jackson - damn him for dying and messing up Flo's chances of getting to #1!), and every single released has charted, with "Rabbit Heart (Raise It Up)" the highest at #12 in the UK. My, how things have changed!

Let's put it like this: I've listened to the album non-stop for the last three days. "Rabbit Heart (Raise It Up)", with a music video that brings to mind the last supper, bacchanalia, and the Lady of Shalott, has been stuck in my head for the last four. "Drumming Song," featuring one of the best drum beats I've heard in a song in years, has been put on repeat during my runs for the last five. I'm just a little obsessed. Just a tad.

While I do enjoy every track on the album, they do have a tendency to blend together. Every song features Florence's powerful, soulful voice, belting out rather impressive lyrics, surrounded by good music that often sounds the same. (One of my favorite lyrics of the year comes from "Rabbit Heart": "this is a gift / it comes with a price / who is the lamb / and who is the knife".) Frankly, no matter how good it sounds, it gets a little overwhelming.

It's only when Florence does something a little different - the drums in "Drumming Song," the rocking vibe of "Kiss With A Fist," or the slightly slower, slightly instrument-based "My Boy Builds Coffins" and "Girl With One Eye" - that she really shines. Don't get me wrong, I love the lyrical complexity of "Howl" and the music of "Dog Days Are Over," but Florence's real strengths lay in her attempts at thinking - and singing - outside the box. That is where she should focus her efforts.