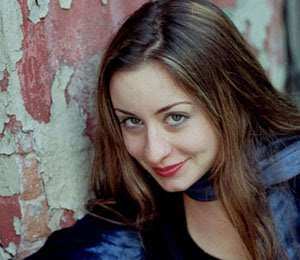 You Need to Hear This:

One of the highlights of my budding (hahahaha, I sound like such a dick, I apologize) journalism career was covering Edinboro's Mieka Pauley show back last September? October? anyway, it was a great experience, and definitely one of the best concerts I've been to, major or otherwise. Really surprised Edinboro managed to reel her in- because I went to some of the other shows and they all were varying levels of "this isn't working for me." I know the odds are more than likely you've never heard of her, but that is a wrong you have to right. She's so good- like, IMMENSELY talented. one of the most compelling live performers I've ever witnessed. and I'm kind of in awe, because I think one day she's going to get the exposure she deserves, that I got to hang out with her during the show and Brian wrote me the setlist (which is now hanging on my bulletin board of prized items).

She just formed "The Mieka Canon" with Brian Cassagnol and Andrew Morgan. Their first album will be released next month, "From the Mouth of Paris." I hope this gives them that push to filter ever-so-slightly into the mainstream.

check out "All the Same Mistakes" from Mieka's debut album, "Elijah Drop Your Gun:"
http://www.sendspace.com/file/3c17au

and I HIGHLY recommend going to her website, last.fm or myspace to hear her other stuff:

and my article from last year, which could have been so much better (wistful sigh):
http://www.eupspectator.com/home/index.cfm?event=displayArticle&ustory_id=a4bfbcfa-724d-4740-8a8f-aaff7fc2c7f7

p.s. do you not see a semblance to Regina Spektor!