movies that come out, today 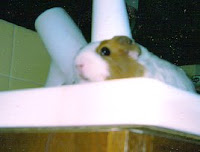 "G Force" looks surprisingly....good! Will Arnett, Zach G, the voices of Tracy Morgan and Penelope Cruz. I mean, if it's at the dollar theater someday and I'm bored enough, I MIGHT just go see it. plus who doesn't love guinea pigs!

(I had a dream about "30 Rock" in which the roles of Alec Baldwin and Tina Fey were reversed. that being, Tina Fey was Jack Donaghy and Alec Baldwin was Liz Lemon).

"The Ugly Truth" gets my vote as the dumbest film of the summer. plus I can't think of a more unappealing couple. Gerard Butler, in this movie, is the on-screen equivalent of a sweatsock.

and because the movie selection for this weekend is less than pleasant, you may want to participate in the various events going on. Highland Days in Edinboro, Discover Presque Isle in Erie. me? not really.

but you may want to go to this, too: "20th Anniversary of the Continental Ballroom" at Beer Mug tomorrow night.