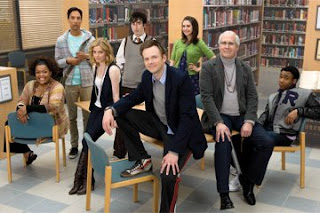 I am so out of the loop when it comes to network television, but I happened to overhear about a new show coming out this fall entitled, "Community."

It stars Joel McHale from "The Soup" on E, and Chevy Chase, the guy from all those vacation movies. and... 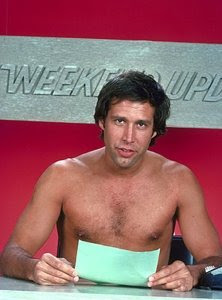 But back to the show. Joel McHale plays a former lawyer with a suspended certification who has to go back to college, which just so happens to be community college. Or as Joel calls it a School Shaped Toilet.

This show looks really funny and smart, and I'll check it out. Along with the final season of Monk (wink.)

So in case you don't know Joel McHale is the man. Respect. "The Soup" is a great show, and JM is funny to the max. Much better than that panties-in-a-knot skank, Chelsea Handler that used to follow his show. "Chelsea Lately," such a waste of time.

And of course Chevy Chase is a legend, and he's sure to be great...because he's Chevy Chase, and you're not. YAY!

This seems like a show that would be better if it were an hour and not only 30 min, so I'm curious if they'll win over the audience in un demi-heure. Some shows should just be an hour long.

Here is the link to "Community," trailer.
http://www.nbc.com/community-show/
I was sold on one commercial. Thursdays at 9:30 this fall. NBC.

QATFYG:
Do you like Joel? What is Chevy Chase's best role? What is your favorite half hour show? ( I can guess what some people might say). And which network airs the best comedies?