Paris, I love you! 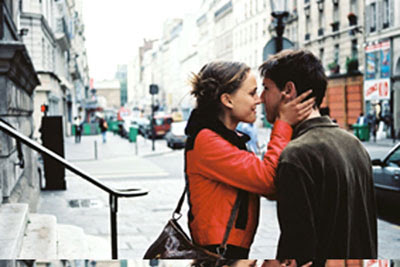 on a whim (total whim) earlier this week I bought "Paris, je t'aime" which I've been meaning to see for a really long time. and I thought to myself, because I think to other people besides myself, "I should buy this because otherwise I'll never see it." wham! bought it.

now, I knew beforehand it was directed by many different directors and featured an A cast with some of my favorite people (Maggie Gyllenhaal and Juliette Binoche, who caught my eye in "Dan in Real Life" of all pitiful things) but I wasn't sure how they went about doing it.

it was a series of vignettes, short films with probably the longest maxing out maybe seven minutes. as cliched as it sounds, there's something for everyone. and it's lovely. it's such a great concept, too- a love letter to a city touching on every aspect of love (platonic, romantic, familiar, etc). I know this is probably not like, the first of its kind, but it left quite the impression on me. Even the ever-dirty Nick Nolte in his role was charming!

I liked each of the films, really. the Elijah Wood/vampiress one was a bit odd, but sweet nonetheless. the one involving the mimes was probably my least favorite, but the drunk redeemed it for me. as for favorites, the dying man and the cup of coffee, Natalie Portman and her blind boyfriend, the man with the woman passed out in his backseat and Oscar Wilde's grave probably rank among mine. as well as the tourist at the end who doesn't seem to know du Beauvoir and Sartre, who may as well be me in the future, let's face the music.

this is a really self-indulgent film review. I apologize.

and not only are the actors amazing, but the directors! some of the more familiar names, like the Coen Brothers and Gus Van Sant along with those less-known (well, for dipheads like me anyway) all shine.

at the end, it's all tied together in a beautiful if not sentimental sequence where all the characters' lives intersecting. to the sounds of, yes, Feist singing "We're All In This Dance" which sealed the deal for me. I am an aspiring Francophile, have been for years (shhhhh) and so I loved the movie. it's heartbreaking and it's exhilarating and I don't care if you end up hating it see it once before you die.

apparently, there is a film like this with Tokyo as the focal point but I couldn't find much information on it because I'm lazy like that. and then there was "New York, I Love You" which was released this May and oh guess what didn't stop in Erie:

also, all my so-inclined female friends out there: Gaspard Ulliel is in "Paris" which should sell you on it alone.

to close, here's Feist and you can't bring it down on a more perfect note than this: