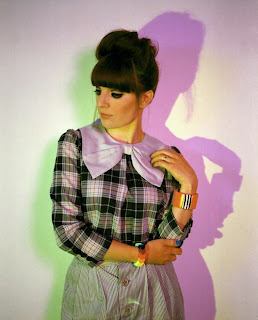 Sometimes it's a name that initially attracts me to a person or musical group. This was the case with Theoretical Girl (also known as= , who I first became aware of thanks to the goodness of hype machine ("oh what a cool name! an adjective I sometimes like to use! CLICK!")

which is not original as I'd like to think, alas, thanks to Gentleman Reg and a no-wave band from New York: "I had a gig booked but still hadn't come up with a name, so my friend suggested that I just call myself Theoretical Girl for now, until I thought of something more permanent. Well, it kind of stuck and three years later I'm still Theoretical Girl! The original idea was that I would be a mystery! I would hide my face behind a mask and no-one would ever know what I looked like, hence the theoretical name! But I realised that it was actually a really silly idea so it didn't happen." (a/n: that would be so cool! like the Shadow!!!!)

Anyway, the rest is history, I became a fast and fervent fan after hearing "The Boy I Left Behind." How could you not? That beguiling voice!

She has been called "stone cold brilliant" and "goth pop genius" by NME (!!!), which is kind of a huge deal (I'd think so!) She's a solo artist that plays with a backing band called the Equations (more name goodness!) and influences that range from her mum to Orange Juice (the band not the drink ... I think) to Hesse and period dramas. Her debut album, "Divided," is to be released on August 17th. At her myspace (see below) there are a wealth of links for preordering available (including one that will guarantee you a ticket to her album launch party, which isn't shabby at all. I myself cannot attend...).

Putting together the album, she said, was "one of the best experiences of (her) life."

"There is nothing I enjoy more than recording. I played most of the instruments on the album myself so most of the time it was just myself and the producer, Andy. It was quite intense," she described it as, adding that the album itself would be "diverse."

"There are folky songs, punky songs, dark songs, sparse songs, very full and big sounding songs! I tried to reflect in my album, my varied taste in music. It also reflects that fact that I just can't make up my mind about most things, let alone what I wanted my album to sound like, so I just did a bit of everything!" So there's bound to be something pleasing for almost everyone's palette on it.

Another huge step is that she played at Glastonbury this year. Glastonbury is one of the biggest musical festivals in Britain, for my fellow Americans ("it takes about 45 minutes to walk between stages because of the amount of people! We lost our driver and he returned with really bad sunburn!" (eep!) )

Although a tour of States is not yet currently in the cards for her (but she does "really really want to" if the record sales are strong enough, because we are a pricy country to play in :( ) she DID participate in this year's SXSW. A grant by the PRS foundation was able to provide for that.

"SXSW is such an amazing festival. It's like sensory overload, so many bands squashed into such a small area!" she said of the other Goliath (not kidding!) American music festival.

"It depends on what era Fleetwood Mac you mean! If it were Tango in the Night, Rumours or Tusk era then it'd easily be Fleetwood Mac!" (agreed!)

so how could you say no to a (theoretical) girl who chooses that! be sure to check her out at the following link.

many thanks to her for doing this!