Everyone has something they're ashamed of: their middle name, the semester they failed out of college, their secret love for the Jonas Brothers.

On the other hand, I'm not particularly ashamed to admit my love for America's Next Top Model, and I'm not afraid to wave my kitsch flag high. I admit that I have a problem: I hate Tyra, I hate Miss J, I hate Nigel "Pervert" Barker, I hate the fact that the show objectifies women and promotes the ideal that skinny is beautiful.

BUT. I love how awful it is. And sometimes there are some real stunners: Fo from cycle 12, Yoanna from cycle 2, Katarzyna from cycle 10, Elyse from cycle 1. Sometimes they're even successful: Fo recently booked campaigns with Nike, Reebok, Target, and A&F, Yoanna hosts several TV shows, Katarzyna has walked in France's couture fashion week, Elyse is big in Japan (on so many levels!).

Today the finalists for cycle 13 were announced. For the uninitiated, Tyra(nt) declared this season - starting September 9 - to be the "short" season. Only models 5'7" and down may apply. In other words, this is now America's Next Top Midget.

However, where previous seasons have had some, shall we say, unmodelesque girls (Whitney, anyone?), this season's girls are downright stunning. Even though they're short, the bitches look like models! And there are only a couple dogs! It's like the apocalypse has come, with Tyra its unholy leader. The J's are the horsemen. (Nigel is the horse.) 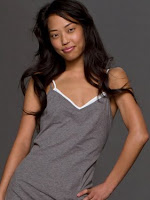 My pre-show favorites are Erin, Bianca, Nicole, Laura, Sundai, and Rae. My guess for the winner? Jennifer. Tyra's been waiting for an Asian winner for 12 seasons now. At this point she'd probably kill off the rest of the contestants to get one. (When Tyra says "judging" this season she really means "execution." Look model-ugly as your head rolls off! FIERCE!)

Where you can see the photos: ONTD.