Because Bradley Cooper Has Them.... 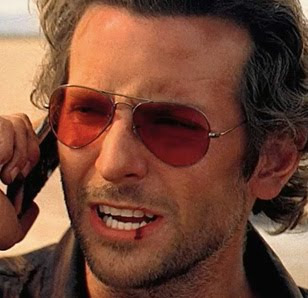 After I saw “The Hangover” I was impressed for a lot of reasons.

One: It was funny.

Even Johnny Cage from Mortal Kombat would have to admit that.

How influential? So Bradley Cooper is becoming the next BIG THING in Hollywood. His name is being mentioned constantly from tabloids about dating Rene Zellweger to being praised on Meghan McCain’s blog. "Like He's So Amazin."

But will I see his new movie “All About Steve” with Sandra Bullock?
Unlikely…..I thought her character would have been a good role for Juliette Lewis. But I’d have to see it in action first.

QATFYG: Do you like the shades? How long will BC’s stardom last? And will you see “All About Steve?”