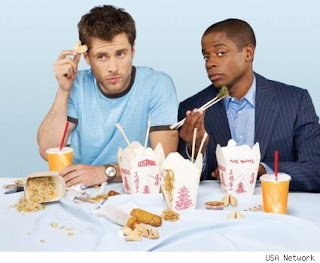 Recently, I've been reading some sites that have criticized James Roday, the lead actor on the USA show PSYCH for an apparent weight gain.

But you know what? Who gives a flying fizzle stick if James Roday is slightly larger than he was 4 years ago. Apparently, it wasn't enough to scare away his current girlfriend/ co-star Maggie Lawson. (Who is one hell of a Catch!) And NO they are not engaged. That seems to be nothing more than a rumor, but there is a very high chance of it happening in the near future.

Anyway, as long as PSYCH continues to entertain I don't mind about James Roday's waist. He, and Dule Hill, and Corbin Bernson too, can eat all the fried broccoli they want.
The last episode of PSYCH wasn't so smashing, but I don't blame it on dietary issues.

QATFYG: Are you keeping up with Psych? And who is hotter, James Roday or Maggie Lawson? (Trick Question but idk why)

PS: If you have heard any more news on Roday and Lawson becoming Roday-Lawson, send it my way. Thanks a milyon. :)