It's the Disturbingly Deep Voice Awards!

Ethan Peck:
Currently playing Patrick Verona on ABC Family’s “Ten Things.” I would describe his voice as a tooting foghorn after somebody pissed in it. Props to his show for coining the name of the award.

Steven Wright:
The comedian with a career spanning 3 decades, I love his stuff. His voice is like a backseat driver on the verge of laryngitis. Great one-liners.

Stephin Merritt:
The second of my 3 role models, and the singer of bands such as The Magnetic Fields and The Gothic Archies. His voice brings some people down, but he brings me up, up, up.

Phil Anselmo:
The legendary vocalist behind musical groups such as Pantera, Superjoint Ritual, and Down. Is it weird that Down is my top pick out of those three bands? His voice is dark and scratchy.

And the Winner is………………..[Insert Drumroll]
JK SIMMONS:
Superstar Actor known as Jonah in “Spiderman”, Dr. Emil Skoda on “Law and Order” (SVU and Original). And let’s not forget the father figure role in “Juno.”
‘I’m gonna punch that Bleeker kid in the wiener!' But the reason JK gains an edge with his throaty lowness is his work voicing the yellow M&M in all those commercials. Now that is iconic! 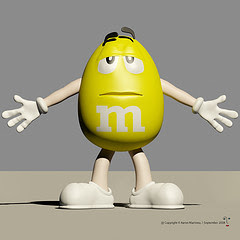 ***And the Honorable Mention goes to…
Yao Ming:
He would be on the list of nominees, but all I’ve heard him say in English is his name, and that isn’t really English. I feel a nominee should have a major speaking/singing role to be nominated. But I’m making him the HM for affirmative action reasons.

QATFYG: Who do you think deserves a Disturbingly Deep Voice Award and/or nomination?