August 23, 2009
The long-awaited Season 6 of Project Runway finally premiered on Lifetime Thursday night and I, for one, am absolutely thrilled. 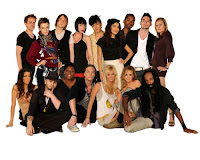 For the uninitiated, Project Runway is an Emmy award-winning reality show that pits fashion designers in the ultimate death-match. Every week a new challenge is assigned; some challenges are realistic, such as this season's first task, in which the contestants needed to design a gown for the red-carpet. Other challenges are... not so much (season 5 included a challenge in which the designers needed to make an outfit out of car parts). The designs are then judged on the runway and one designer is kicked out. The final designers left standing put together a full collection and show at Fashion Week in New York City. One wins. Pretty basic.

The fate of the show was left hanging after the show's creators decided to move it to Lifetime (from Bravo). Various law suits ensued and the show was in limbo for quite some time. Fortunately, everything worked out in the end! I mean... the shitty designs! The delusional contestants! The rampant bitchery! It was like finding an oasis in the middle of the desert after spending ten years without water.

The great thing about this show is that, unlike many reality shows (cough America's Next Top Model cough), it requires actual talent from the designers. The contestants need to design fast, sew fast, and not screw up. It's downright impressive.

In my opinion, the move to Lifetime was a good thing: they're advertising the show to death, they added on a new "Models of the Runway" show, they had a two-hour "Project Runway All-Stars" show (the results of which were... less than desirable), and they're serious about maintaining the integrity of the show. Good job, Lifetime.

If you missed the premiere, or don't get Lifetime, or can't watch on Thursdays at 10pm EST, you can watch it on myLifetime.com or YouTube/DailyMotion. It's good stuff.