Before She Was Bella: The Saga Continues 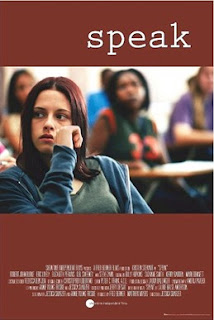 Yo!
So it’s feels like forever since I posted on the Before She Was Bella series, but tonight the drought ends and the Kristen Stewart insight shall monsoon down upon us all. The Kristen Stewart moment of the moment is her film “Speak,” based on the novel of the same name.

I read about 50 pages of the novel on a family trip, and already I could guess the mystery of the premise. Even from watching the first 10 minutes of the flick, you can figure out everything. This film was very predictable, but it does have its strong moments.

Kristen plays the depressed teenager, Melinda Sordino who calls the police during a summer party, and aggravates her fellow classmates before her first year of high school. And you learn the hidden parts of the story as the film goes onward, but it’s fairly easy to guess.

I was surprised that it actually had some good art direction and cinematography, which were things I did not expect to see. So props to those guys and gals.

During the film I actually laughed 3 times and smiled once. Oh yeah! This film isn’t a comedy, but given that it’s a teen movie a little laughter doesn’t hurt to lighten the mood. I say it could have used more than 4 jokes that were actually funny.

The things I liked were, it’s set in an almost hyperbolic high school setting, where the negatives of teen life are strongly, and I mean strongly emphasized.

So How did Kristen Do?

I felt that Kristen Stewart didn’t completely sell me on the role. From reading 50 pages of the book, I could see the character of Melinda had a much stronger sense of wit and a deeper personality. KS didn’t really bring the profound internal mind that Melinda Sordino is supposed to have.

****Overall, I give it a 6.8 out of 10.
It isn’t bad, and there were some sweet moments, and some emotional ones. I liked watching it, but some parts I was just thinking… “This is so boring!.” But it is worth seeing, and KS is okay. Not great, just okay.

QATFYG:
Have you seen Speak or read the book? Are you a teen angst fan? And are KS and Robbie Boy Pattinson are married yet? The tabloids keep telling me yes, and Wikipedia keeps telling me no.