So moments ago the season finale of “Desperate Housewives” just ended on ABC. I actually have not followed this show for very long, beginning my tenure as a DH fan last spring. Over the summer I got their back-to-back daily episodes on Lifetime, and now I’m hooked in tightly.

This season has started with some new mysteries and wrapped up some old ones.

Marcia Cross is performing infidelity rituals with her divorce lawyer.

And of course Teri Hatcher is getting married.

If you’re reading this and think it sounds rather plain…well it is. Overall I thought the majority of the show was not very interesting, and I actually spent some time reading a history book instead of paying attention.

UNTIL the final minute of the show* This is where DH capitalizes on its greatness. Teri Hatcher’s daughter Andrea Bowen, (Character: Julie Mayer) gets choked liked rotweiller with a bad case of rabies. Then, she fell to the ground unconscious. This made me mad. I have said multiple times in conversation that Julie Mayer is one of the best characters on the show, even though she isn’t the lead. 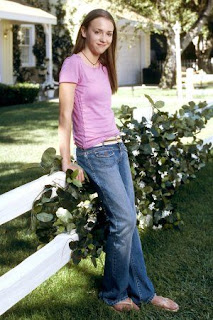 Her issue is related to a new family on the block, which also appears to have plenty more dark secrets. “Desperate Housewives” has had its share of families with dark secrets, but these new people look really sick and twisted. I am definitely watching next week, if for anything to find out more about poor Julie Mayer. Get well soon.

Review Rating: Good Stuff! (The last minute of the show made all the difference.)

QATFYG: Did Teri Hatcher actually hook up with David Spade a few years ago? I heard this on the radio once, and it sounds so implausible it must be true.