The King Has Left The Building

After 13 seasons on the air “King of the Hill” closed tonight at 9 PM.

This is a show that I’ve been watching since Elementary school, and I will miss it. It’s had some hilarious seasons, and it’s also had rather dull ones. But overall it was watched frequently in my house.

I am amazed that it lasted as long as it did considering it never seemed to earn a great reception among the masses. I even once referred to it as “The show nobody ever talks about.” But it’s had its moments.

The finale was divided into two episodes, which were not related, and in all honesty they were not the show’s best work. It was not until the last three minutes that I really found the strong effect of what a series finale is supposed to have.

So Au Revoir “King of the Hill.” 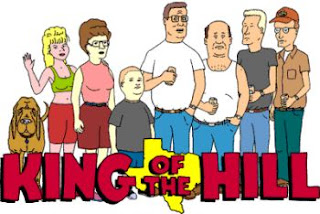 QATFYG: Any thoughts on the prediction? Did you watch the series finale of KotH? And are you a fan of Fox animation domination?