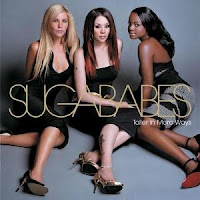 The Sugababes are apparently a well-known pop girl group in the UK. "Apparently" because I've never been to the UK and, thus, must rely on what I've read on the internet. They've had a number of hit singles ("Freak Like Me," "Push the Button," "Get Sexy") and are pure, unadulturated pop goodness. While they might be pop, they're foreign, so it's okay to like them.

On September 22 it was announced that singer Keisha Buchanan - the last remaining founding member - has left the group. She's been my favorite since I first heard "Overload" and "Run For Cover" on the internet back in 2001. I remained a fan when they rebranded after Siobhan Donaghy left in 2001, and kept listening until Mutya Buena left in 2005. Siobhan's replacement, Heidi Range (formerly of Atomic Kitten) was an acceptable replacement, but I hated Amelle Berrabah, so I gradually stopped listening. Jade Ewen has been chosen to replace Keisha in the group.

Keisha was the girl with the voice, the talent, and the connections to keep the band going. I'm a little sad that she has left - especially since it appears that she was forced out - but all good things must come to an end, right? It's not like I was going to listen to their new album ("Sweet 7," out November 23 in the UK) anyways.

Has your favorite band ever replaced a singer/musician? Do you think foreign pop is generally better than pop from your own country?