I'll be honest with you: I'm not a movie person. I have trouble sitting still. I'm impatient. I'm constantly looking at the time, or picking up a book, or doing something else while the movie plays. So a movie that actually captures my attention is pretty rare.

"They Shoot Horses, Don't They?" is Sydney Pollack's 1969 film adaptation of the 1935 novel written by Horace McCoy. It takes place in the 1930s, during the American depression, when people were desperate and willing to do anything for money, such as marathon dancing. Marathon dancing was one of the seedier money-making schemes in the '30s, and that is vividly shown in the film: people would eat, sleep, and even die while in a state of constant movement. The film depicts all of this, as well as the concept of the "derby" - vicious high-paced races around the dance floor - in a stunning, grotesque manner. 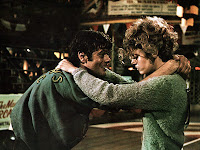 The film focuses on a varied group of people desperate to win the dance marathon and the corrupt emcee who urges them on. Robert (Michael Sarrazin), a dreamer, is recruited to dance at the last moment and is intermittantly shown to be at the center of some unnamed crime. His dance partner is Gloria (a young Jane Fonda), a woman who masks her depression and emptiness with a cynical veneer of nastiness. Other characters include Rocky (Gig Young), the emcee; Harry (Red Buttons), a sailor; and Alice (Susannah York), a hopeful actress. They all need the prize money - $1500, virtually worthless by today's standards - to survive, to become happy. Here's a spoiler: in the end, we are all animals, aren't we?

This is a vicious film, not meant for the weak at heart. At turns it's gruesome, disgusting, cruel, and horrifying. A pregnant, homeless, penniless woman and her husband vie for the money; the sight of the woman grasping her stomach is horrible. Alice's breakdown is heartwrenching. And the ending made my gut drop.

And it all really happened. It's a reality TV show, well before they had televisions. It is honestly one of the most powerful films I have ever seen. I don't regret watching it - but I don't think I could watch it again. I watched this film two weeks ago and I've had trouble writing about it because I haven't been able to find the words to describe it. I can't recommend this film highly enough.