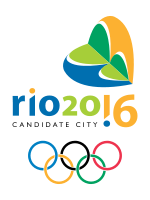 So by now I'm sure you've heard that the International Olympic Committee selected Rio de Janeiro, Brazil, as the location for the 2016 Summer Olympic Games, as well as the 2016 Summer Paralympics. Other finalists included Chicago, Tokyo, and Madrid. Going into the final voting, Chicago and Rio de Janeiro were thought to be the favorites. Chicago was summarily knocked out of the running in the first round.

As a native Chicagoan (born, raised, and living here at the present time), I think I can safely speak for the vast majority of us: we're glad we didn't get it. There have been plenty of celebrities, athletes, and Very Important People (ranging from Barack and Michelle Obama to Oprah to Michaels Phelps) who have supported the nomination, but the common opinion has largely been that of ambivalence.

The main issue is that of financing. From whence will the money come to pay for the Olympic Village (and stadiums, etc)? In part from private investors--who may not have the funds when the time comes--but mainly from the government (read: taxes). Nobody wants that. There would also be the inconvenience of the large amount of construction and the weeks of overly busy public transportation. Plus, we'd be forced to hear about the Olympics for the next 7 years. That would just suck.

I love the Olympics, and I also quite like the fact that I'd be able to walk a block, hop on the train and head downtown to see the games (gymnastics, anyone?), but I'm quite glad Chicago was not chosen for 2016. Maybe 2020 will be our year - and maybe we'll be a little more prepared to finance the games when the next bidding process comes. For now, have fun, Rio de Janeiro. Good luck on fixing your infrastructure in time.