October 07, 2009
A Brief Foreword: I've been watching a number of LGBT-themed films and TV shows lately. I've decided to review them. So. Enjoy.

The 2000 film "Big Eden," directed by Thomas Bezucha ("The Family Stone"), features Arye Gross as Henry Hart, a successful artist in New York City, who feels compelled to return to his Montana hometown of Big Eden when his grandfather (George Coe) has a stroke. In Big Eden he meets up with old friends and acquaintances, including his childhood best friend Dean (Tim DeKay), on whom Henry had - and still has - a crush. Dean is straight and newly single, with custody of his two children. But is he really all that straight?

Another acquaintance is Pike (Eric Schweig), the overwhelmingly shy Native American owner of the town's general store, who just so happens to have a crush on Henry. The town's denizens - including Widow Thayer (Nan Smith) and a group of older men who spend the vast majority of their time at the general store - are all willing to help Pike do whatever it takes to win over Henry. But will Pike be able to get over his shyness to tell Henry how he feels? Will Henry be able to move on from his long-time crush on Dean--and will Dean let him? Will Henry leave Big Eden for good? 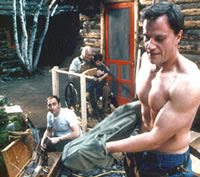 Set among the beautiful Montana mountains, this sweet romantic drama breaks free from many of the stereotypes of LGBT-themed films. Everyone, right down to the small-town mechanic, is accepting of others, regardless of sexual orientation. The main characters are in their mid- to late-30s, drug- and disease-free, and perfectly ordinary in every way. Henry's relationships and interactions with his loved ones are true to life - he can't move past Dean, he can't bear to come out to his dying grandfather (who does, in fact, give him the opportunity to do so), and he is so blinded by his feelings for Dean that he can't see what is right in front of him.

This film felt eminently genuine, with the characters acting as you'd expect they would if their world were real. Dean's feelings for Henry are

wonderfully complicated, while Pike's debilitating shyness around Henry is incredibly realistic. And, finally, when Henry's grandfather tries to persuade Henry to come out to him, his comment, "Did we teach you shame? Did we teach you that?" fits the entire coming out situation perfectly. However, my one issue with this film is the ending: things clicked together a little too well. But it's a romance, so who cares? Ultimately, "Big Eden" is a sweet film meant for those of you who love love. (8/10)