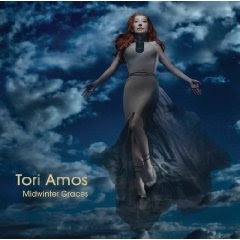 I've been listening to a lot of Tori Amos lately. Should I be proud of the fact I'm admitting this at 1:27 AM on a Sunday morning when I'm stuck doing homework? No.
Tori, my old bitch, was my go-to fix for probably ... 2003 to 2006, I think? those years her music was, God. it was sick how stuck on her I was! like, one of dozens of angst-filled young girls across this planet ("little blue world" o HAY). that was, hmm. I have gone through the following musical phases in my short, unadventurous life:
No Doubt (7th grade to about 9th) - Radiohead (9th grade) - Tori Amos (9th to 12th grade) - Fiona Apple (12th grade to college) - Feist???? but not really. I don't think that's possible to get THAT into Feist. like, enough to try to find yourself (and potential thesis topics!) in her near-cryptic lyrics involving sacred womanhood, Jesus, cumming not equating Jesus, etc.

Anyway, I had a schism from the HOLY CHURCH OF TORI after I just got sick of her fans and the route she was going. and I'm prone to say anything past "Scarlet's Walk" is just ... crap. Well, not totally. Some songs (i.e. oh my god "Toast") are gorgeous and amazing, as ever. I mean, the woman's a genius. It's just her nuttiness tends to outshine her talent. Because, I'm going to say it right now, I don't believe any of the up-and-coming grrls-with-a-piano singer-songwriters, which seem to be so generic and repetitive anymore, half half the talent that woman has in her pinky toe. I mean, God, watch her gyrate on the piano some time. Listen to "Winter!" That's a total tangent altogether. To summarize this paragraph: I haven't connected to any of her albums since 2003. "Scarlet's Walk" was, well, perfect for me. the whole concept behind it? loved it, loved it, loved it. addressing America was a woman. nice.
(by the way, I'm not exaggerating with my Tori passion. ask anyone who was my friend in like, 2004. and isn't anymore. :P there's a lotta them!)

And her fans are fucking INSANE okay. I bet I'll have a dead opossum on my doorstep tomorrow because of this. anyway.

Well, I've been listening to 1998's From the Choirgirl Hotel like crazy since last night. I forgot how purely good it was- dark, atmospheric, electronic in all the right places and so poignant in the rest. just the right hint of experimental that placed her ahead of the curb at the time. you listen to it now, eleven years later, and it still feels fresh. (eleven years! SHIT!) "She's Your Cocaine," "Northern Lad," "Jackie's Strength." Wow- especially those last two songs. Possibly some of the best work she's ever done, or ever will do. (SRY TA)

I was just deciding to become a fan of hers on Facebook (THE ULTIMATE TRIBUTE BELIEVE YOU ME). It was upon doing that I fell upon this interesting project of the Tori:


After nearly two decades writing and recording some of her generation's most emotionally powerful music, Tori Amos will release her first seasonal album, Midwinter Graces, on November 10 via Universal Republic Records. A follow up to Tori's critically acclaimed studio album, Abnormally Attracted to Sin, Midwinter Graces will find Tori reworking and expanding on classic carols as well as developing some of her very own seasonal tracks.
Midwinter Graces is an album that has been in the making for the past 40 years. Raised in the Baltimore area under the watchful eye of her Methodist minister father, Tori grew up playing holiday carols at Sunday services and Christmas Day celebrations in her father's church. These were the songs that gave a young Tori her first taste of music, and now almost 40 years later Tori gets her own chance to reimagine classics like "What Child, Nowell" and "Star of Wonder." Tori will also add her own bittersweet bliss to the season with original tracks like "Pink and Glitter" and "Our New Year."

For Midwinter Graces, Amos has again teamed up with long time collaborators Matt Chamberlain on drums, Jon Evans on bass, and Mac Aladdin on guitars. Tori has enlisted the help of a Big Band and an Orchestra with stunning John Philip Shenale arrangements to create Tori's new seasonal classics.

Oh. my. god. It wasn't so much the concept that WTF'd me, it was the album cover. OH MY GOD. PLEASE TORI, PLEASE START AGING NATURALLY. AND NO, YOU DO NOT FLY. YOU ARE NOT QANTAS. NOR MARY, SOFIA, JUDAS OR DAN BROWN.

I mean she's a beautiful woman, as these pictures prove:

If I looked like that I would go around singing about my vajajay too! WHYYYY does she present herself the way she does? Jesus! I know she's closing in on 50 but I mean- bitch! natural aging! try it! I bet she'd be one hot "Earth mother" aging-hippie cougar if she tried...not like, some waxy witch lady that might eat me. (please don't hate, I really do love Tori Amos, please don't kill me)

Anyway, that being said. I was all about to redeclare my love for T.A. and become a born-again fan, one that didn't hesitate when investigating concert tickets because of the "ears with feet" but this sort of threw me off. but at the same time, like I did the Clay Aiken Christmas album, like I did the NBC Christmas album (featuring Jane Leeves!!!!) I will buy it. I love these seasonal things. Like Starbucks' pumpkin lattes. I am consumer trash.

to sum up this post: SIMULTANEOUSLY LOVE, RESPECT AND FEAR THIS BITCH

songs to come later this week, as well as a look at her latest album, which I really didn't pay attention to (because of the title and I didn't like it much).