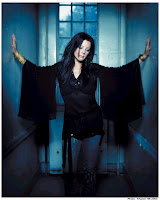 Something I just discovered: LILITH FAIR IS BACK, BITCHES! Yeah, I'm a little late on the uptake, but I'm okay with that.

It was a music festival celebrating women in music back in the late '90s. Think, Sarah McLachlan, Lisa Loeb, Fiona Apple, Indigo Girls, Sheryl Crow, and other female musicians and bands who aren't really relevant to music today.

As I grew up on Tori Amos and Fiona Apple and other female-led acts, I am ridiculously excited for this event. And they're coming to Chicago! And Philadelphia, for those of you from Pennsylvania. The majority, I'd guess.

I'd love it if Jonatha Brooke, Tegan and Sara, and Beth Hart show up. Who do you hope plays at Lilith Fair 2010? Do you think the Spice Girls will reunite (again) to play there?