Imagine, if you will, that you have the power to make the person you love fall in love with you. What would you do?

Tom Gustafson's 2008 musical film "Were the World Mine" takes this premise and turns it on its head. Timothy (Tanner Cohen) is an openly gay student at a private boy's school, where he is physically and verbally harassed by the rugby team, including his crush, team captain Jonathon (Nathaniel David Becker), and his gym teacher (Christian Stolte). He has no help on the home front either, as his single mother doesn't understand his sexuality and his father is not a part of his life. The only support he receives comes from his best friends, Frankie (Zelda Williams, Robin Williams' daughter) and Max (Ricky Goldman), and his drama teacher, Ms. Tebbit (Twin Peaks' Wendy Robie).

Things change when Timothy is cast as Puck in his school's production of Shakespeare's "A Midsummer Night's Dream." While memorizing lines, he discovers the recipe for a magical flower with the power to turn people gay hidden within the text. Timothy makes the flower and becomes a real-life Puck, making the bigoted heterosexual townspeople walk a mile in his shoes, as they fall in love with their same-sex acquaintances. Before long the town is thrown into chaos and Timothy is forced to decide whether his actions were right. But will he be willing to go back to the way his life once was, or will he choose to live with the consequences of his actions? 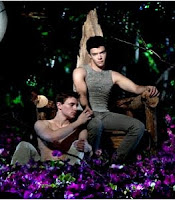 In "Were the World Mine," musical numbers arise organically and tie in to the plot of the film, a rather unique occurrence among musical films. Furthermore, the film was cast extremely well, as every actor and actress nails every note - in both musical numbers and on screen; a truly impressive feat. Tanner Cohen's performance as Timothy is particularly exceptional, standouts being his duets with Wendy Robie in "Audition/Be As Thou Wast Wont" and the eponymous "Were The World Mine," with Nathaniel David Becker. Both songs give me chills every time I hear them. (Click here to watch the song "Were The World Mine" performed.) Cohen undoubtedly has a future in musical theatre. As a rather surreal queer version "A Midsummer's Night Dream," the film pays tribute to the original magnificently, and just like the original, the romance is great. This film's got a lot of heart and it's understandable why it has received a ton of audience awards at film festivals around the world. It may have been released in 2008, but "Were The World Mine" is my favorite film of the year, hands down.

I don't care if you're gay or straight or if you like musicals or hate them. You need to watch this film. Right now. In fact, you can stream it online from the LOGO website right here. You can thank me later. (10/10)