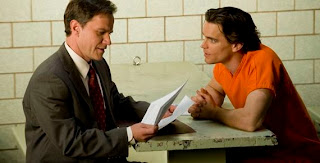 White Collar is a new TV show on USA Network that premiered Friday, October 23rd. Neal Caffrey (Matt Bomer) is a con-man who, having broken out of prison, was just caught by FBI agent Peter Burke (Tim DeKay) - the same agent who caught him the first time. They make a deal: Caffrey will help Burke catch other criminals if he is allowed to remain free. Burke agrees, and Caffrey lives up to his word. Or does he?

I'm not usually into crime shows (Bones being a major exception). But this didn't look like every CSI/NCIS/law show clone that you see out there. It looked like it had attitude, which is always good. And having watched the first episode... I kind of liked it.

There was some humor that made me laugh out loud ("How upset were the Canadians?" "Very. Or, as upset as Canadians get.") and some smart crime-solving. Caffrey is perhaps a little too smart, likeable, and resourceful, but that's not necessarily a bad thing. It works for the show. Burke is also pretty realistic - I like the fact that he actually looks like an FBI agent: older, graying, tired, and not the best body. (For those of you who don't remember, Tim DeKay was one of the love interests in the movie "Big Eden," which I reviewed earlier this month.)

The show is a little obvious and a little stereotypical. But... you know what? It's good. I sat through a horrible internet connection and those awful Blackberry commercials to see the entire 60 minute show, and it was worth it. If the show had a little more humor and showed more of Burke's assistants - one of whom is a black lesbian, which is rare for television - it would be perfect. As it is I think I'm going to try to keep up with the show for the time being.

Anyone else see this show? You can watch it on USANetwork.com