November 15, 2009
Okay, I've just been discussing things with people, and I want to know what everybody thinks about these things.
When I bring this stuff up everybody thinks I'm stupid and wrong, when I try to say that the laws aren't what they think they are like.....

And for many states such as West Virginia, it's 16 and four years apart. So a 15 year old can mate with and 18 year old and it's not illegal.

Also, the constitution says there is no official language, but language is regulated by the states in the US. 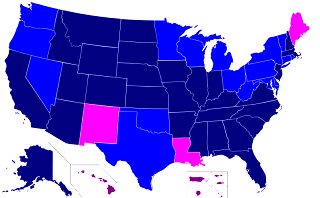 Lastly, it is my understanding that you do not have to be born in the United States to become president.

The constitution does not mention it. It states you have to be born a natrual born citizen not a native born citizen.

I was born in the nation of Algeria, and from the moment I was born I was a full American Citizen because my mother was American.

Here is the rule: If you are born abroad to 2 parents with US citizenship, then you have to live in the US for 14 consecutive years before you could run for president (and meet all other criteria).

If you are born abroad to one parent with US citizenship, you have to live in the US for 14 consecutive years and your parent has to have lived in the US for 9 consecutive years. Barack Obama meets this. So even if he was born in Kenya, he would still be eligible to be president. Also, John McCain was not born in the US. He claims to have been born on a military base, but according to his birth certificate he was born in Colon Hospital, in Colon Panama. However, he is still eligible to run for office.

QATFYG: Is any of this correct? The reason I ask is because the media and television never acknowledges any of this. I've read it a thousand times online, but not even anyone I know thinks these laws to be true. They think states have no official languages, the national age of consent is 18, and you have to born on American soil to be president. PS I will delete this after a while because it's too big to keep around. That's what she said.