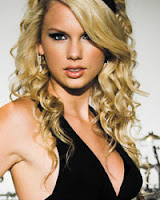 Last night Taylor Swift destroyed the competition at the Country Music Association Awards (the CMAs) by winning in every category in which she was nominated: Female Vocalist of the Year, Album of the Year ("Fearless"), Music Video of the Year ("Love Story"), and the top prize, Entertainer of the Year. Some people are in an uproar over her success, saying that at 19 she's too young to receive so many awards. I think they need to get over themselves. Taylor's more successful right now than pretty much every other country singer out there, and it's well deserved.

Plus, in her acceptance speech for Female Vocalist, she said, "I want to thank every single person in this room tonight for not running onstage during this speech." Love her. 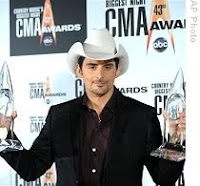 Listen to nominated/winning songs on YouTube:
Taylor Swift - Love Story
Lady Antebellum - I Run To You
Jamey Johnson - In Color
Brad Paisley & Keith Urban - Start A Band
Darius Rucker - It Won't Be Like This For Long