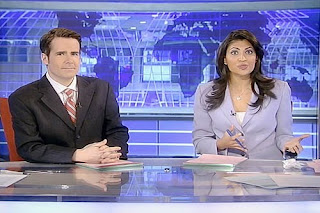 Thanks to NaNoWriMo I've rediscovered the joys of procrastination. Let's just say I am now well-acquainted with late-night television and I've lost more hours to reruns of Laguna Beach than I really care to admit (one, actually, and that's quite enough).

In spite of an overload of tacky rich kids, I have discovered something quite exciting: World News Nightly (3-4 AM CST) and America This Morning (4-5 AM CST), both on ABC. These shows are anchored by Jeremy Hubbard and Vinita Nair - both of whom have rapidly reached the ranks of my favorite news anchors (right up there with Anderson Cooper, who hosted WNN from 1999-2000, and Gaynor Hall and Sean Lewis, both on the Chicago-based news network CLTV). Both of these news programs offer a humorous, irreverent look at news today that is interesting, informative, and funny, if you're a news-junkie like me. I'm somewhat confounded that I haven't discovered these shows before. I suggest you get up early - or stay up late - and check 'em out.

Were you aware of the existence of World News Nightly and/or America This Morning? What is your favorite news program? Who are your favorite anchors?