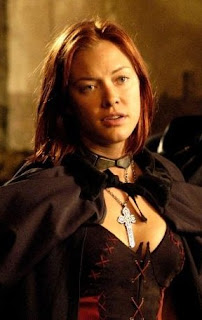 It's official we are going to have "Bloodrayne 3!"
And it is starring the poorly reviewed actress Kristianna Loken. She was the lead in the first "Bloodrayne" movie, and it flopped like E.D. , so they replaced her with some other tooter (Natassia Malthe.) But I guess that flopped even worse, so Kristianna has her job back as the sexual star of vampire whoredom.

"Bloodrayne 3" is going to appear sometime in 2010, and no, I most likely will not go see it. The reason is KL is the spotlight/shoutout diva/queen bitch of the week is because after she was nominated for "Worst Actress of the Year" at the Golden Raspberries (for Bloodrayne) , I meant to write a stage play for her, so she could jumpstart her career on the underground artsy circuit. I never wrote it, but I imagined it would be about 3 women who drink a lot of champagne. And since I didn't help her with her career then, this is the least I can do.(I dream the dream dammit!)

Anyway, KL also did "Painkiller Jane" and the coolest show of all time "Mortal Kombat: Conquest" where she played the sex symbol theif, Taja. (And no Taja is not some slang term for Vagina!!)

OH BTW, this is important, don't ever refer to Kristianna Loken as Kristine Lakin like I did once. Kristine Lakin was Al on "Step by Step." Much more impressive life

So here is to Kristianna Loken getting her job back, and not having to starve as a stage actress in one of my plays. Eh, maybe in some alternate reality her and I are close friends along with Stephen Colbert, Roger Federer, and Cam Manheim.

QATFYG: Did you watch mortal kombat: Conquest? Are you a Bloodrayne fan? And what is the worst movie you have seen associated with Vampires?