It's that time of year again, where ABC Family owns me

January 04, 2010
So tonight in a few minutes is the premiere of ABC Family's 2 most popular shows. 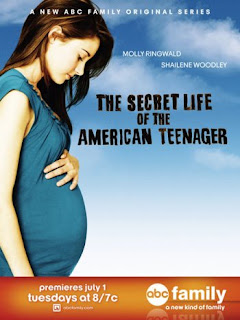 At 8pm is "The Secret Life of Teenager." I have stated in the past that I watch this show; however, it is not for its quality. The show is so boring, but I keep coming back. At least the previews make me want to find out what happens. The show is chee-z and fake. For the most part it's really annoying, but I've been watching it for so long I want to know what happens. Oh and I know she had the baby, and the pic is out of date, but whatever. Not much has happened to Shailene's life since she lost all that weight.

At 9pm is "Make It, Or Break It," with its second season premiere. I love this show. It might look a little girlie, being about female gymnasts and dating boys, but it is really good. I love the character dynamic of the leads and for a teen show it is very well written.

Not to mention the four lead actresses were perfectly cast. Ayla Kell who is center right in the picture gives a great performance. Last season had a major cliffhanger, and I was dying to find out what happened. This is the best show on their network.

So here is my result:
Secret Life should end with a TV movie that resolves all their stupid conflicts and let me move on with my life.

Make It, Or Break It can be on as long as it can because it's awesome.