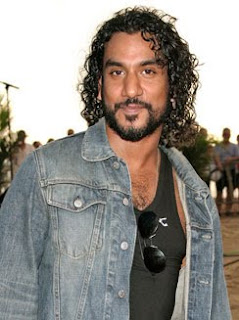 So this is a face that can be seen on the television show, “Lost.”
Naveen Andrews has made his way to fame and critical acclaim (that rhymed) with his performance on “Lost” as Sayid Jarrah, a former Iraqi Soldier in the Republican Guard.

It was not until these past 2 weeks that I had ever seen the show “Lost,” and I have been missing out for the last 5 years. If I had seen it more recently, it would have made it onto my list as one of the top ten shows of the decade.

Lost masters the cliffhangers probably better than any other show out there.

Naveen A. is sitting as the spotlight/shoutout king of the week because of intricate ways he portrays his character. Although, he is not of Middle Eastern decent (he’s South Asian Indian) he plays an Iraqi who is not made out to be a villain. In fact, he is a hero. And at this time in history, the Iraqi people need more positive imagery in the public media.

Sayeed Jarrah, although fictional, is an inspiration. Naveen's performance has received great reception, and he was even nominated for a golden globe award. Respect.

Season 6 of “Lost” premieres in February, and most likely will be great.

QATFYG: Do you watch Lost? What show has the best cliffhangers? And would you be nice to an Iraqi if you saw him on the street?