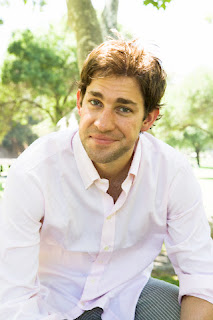 So this is a face that many will recognize as that guy from “The Office”, or that guy from “Away We Go,” and apparently he is also in “It’s Complicated,” not that I want to see that.

But none of that is important today, and John Krasinski is earning the first s/s of the New Year for his work on “Brief Interviews with Hideous Men.” This movie will be available on DVD in February, and I am so excited to see it. Krasisnski directed, starred, and adapted the screenplay for this film.

It’s based on the writings of the late “David Foster Wallace,” who had a lot of stuff going on in his mind. Big surprise.

The movie will tell the tale of a grad student who copes with a break-up by interviewing other people………….such as British sex symbol, Dominic Cooper. (Wink)
And “Law and Order: SVU’s” Caucasian badass, Christopher Meloni.

(Btw Meloni is a Sardinian name.)

The reviews for John Krasinski’s film have not been super positive, but I will go into it with an open mind. He has a great cast, including Timothy Hutton, who always keeps popping up in things I like.

QATFYG: Do you like JK? Would you sleep with Dominic Cooper (The fiancé from Mama Mia)?, and have you seen “Brief Interviews with Hideous Men” already, or will you see it on DVD?