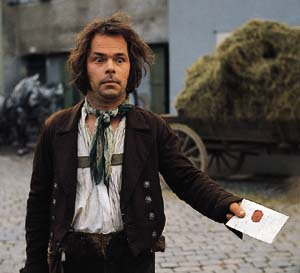 So this is by far the S/S post that I am enjoying the most.

Last Saturday I caught the movie "The Enigma of Kaspar Hauser," which is the story of a German man, who was locked in a room for the first 17 years of his life and just showed up one day in a town square.

Ten minutes into the film I noticed that the actor playing the lead, Kaspar, was amazing. So I read more about him.

Bruno Schleinstein, otherwise known as Bruno S., is a man also with an interesting background. He was severly abused as a child and beaten so badly by his mother that he was deaf for a certain amount of time.
Bruno grew up in and out of various institutions, but when his hearing came back he learned to play musical instruments, especially the piano.

Her was the focus of the documentary "Bruno the Black," which led to his discovery for film acting by director Wernor Herzog.

With no acting training, he was cast as the lead in "The Enigma of Kaspar Hauser."
Following this effort Wernor Herzog composed another film script especially for him "Stroszek." Herzog wrote the script in only 4 days with Bruno in mind for the lead.

After the 70's, he disappeared from Film Acting for a time and did not return to a feature until 1994. Rad.

QATFYG: Do you have a favorite German film?