March 08, 2010
For starters Alec Baldwin and Steve Martin were great hosts.
I really liked their chemistry and humor, but I wondered how they would get through without a musical number.....then there is Neil Patrick Harris to save the day.

So like I said, Miley and Taylor were out of line....and I really did not like how when Miley was up on stage with Amanda Seyfried and she says "We're nervous, it's our first time up here."
OH come on, like you've never presented an award before, and you've also been to the Oscars.....Not to mention Amanda S. presented the special last year with R Patz about Romance movies.

All of which were Great and Followed with Great Speeches.
I love how Sandra said in the Baps interview that if Meryl Streep won, she's gonna "kick her ass."

Also Christoph Waltz was so good. He was unbelievably good in "Inglorious Basterds." But I noticed that whenever a person from a Spanish country wins, they say words home to their native country in the native language. Why didn't Christoph address his home nation of Austria in German? No home pride.

Other note: This is the 3rd year in a row that the Best Supporting Actor has gone to a psychotic killer. 2008 was the shotgun wielding Javier Bardem. 2009 was the JOKER, and 2010 was the Jew Hunter. If you want to win an Oscar, play a crazy guy that kills people.

UP won multiple awards. This must be one hell of a movie. I need to see it.

Oh and Kristin Stewart and Taylor presented, and I swear KS had swallowed like 4 liters of diet coke before she went up there because she choked on her lines, and then spent the rest of the time trying not to burp like her esophagus was filled with carbonation.

And for the first time there was a female to win "Best Director," and she did it beating out her ex husband, James Cameron. Go Kathryn Bigelow, and the "The Hurt Locker." Happy Women's Day KB! 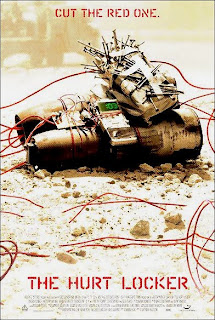 Your Champion: The Hurt Locker!