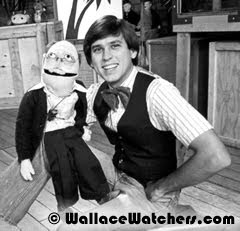 So if you need something out of the ordinary on this Wednesday, look no further than Dan Horn and his good friends.

I've spent the last few days doing nothing but listening to ventriloquists, mostly thanks to Jeff Dunham, but I decided to look at the recommended videos youtube provided me, and I came across some Dan Horn works from the 80's.

This guy is funny, and he works so well with dummies. He is very good at articulating the scenes. Is he as funny as comic icon and puppet master Jeff Dunham? Well, that's all matter of opinion, but not exactly. However, I will say that he does certain aspects of the Ventriloquism better.
He can move his lips less, and he has better interactions with the dummies.

Good stuff, and lots of laughs. Especially his vids with the dummy Orson, a 91-year-old former singer.

Also, if you are into this art check out Nina Conti with her Monkey, and that one guy from America's Got Talent! Who knows what his name is?

QATFYG:If you were a ventriloquist, what would your dummy look like?