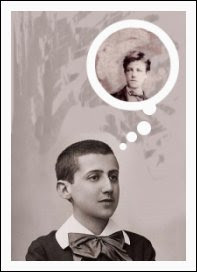 He never says it, which is odd because he says nearly everything else, but the young Proust certainly had a thing for the young Rimbaud. The Rimbaud moody teenagers scribble in the backs of year books. The “Ophelia” Rimbaud.

Beginning Swann’s Way with falling asleep while recounting his habit of using a pillow as a precautionary device before returning to dreams, we assume the young Rimbaud would have become annoyed by now, page 12, sending the young Proust into a several day lament spent in his “inviolable solitude” reserved for such occasions as “reading, reverie, tears, and sensuous pleasure” and oh my god.

The first 50 pages centre around such solitude; mainly the “tears” part. His mother is downstairs with the others— Swann has arrived— and he has been sent to his room for bed without receiving his goodnight kiss from her, but, once the gathering has concluded, he lunges himself at her stair-climbing silhouette. He’s hysterical and his father insists she spend the night consoling him; it is here where his sadness, for the first time, comes to be viewed as an “involuntary ailment” rather than something punishable and he discovers the undo stress he’s causing this poor woman.

It seemed to me that with an impious and secret hand I had just traced in her soul a first wrinkle and caused a first white hair to appear.

Proust is probably around ten at the beginning of In Search of Lost Time because unillustrated books are still something of a novelty to him. In comparison, and I’m going to go on record as having listened to My World 2.0 last week, snob that I am, this makes Justin Bieber seem like even blander pap, as I opined in my still-unpublished 3.2-rated Pitchfork review.

Really, Biebs? Where is your pain! Your neurosis! Your unending strands of epiphanies which are so profound and elegant that they quickly become irritating! We know where your platitudes are— they are found as pieces of furniture belonging to Proust’s grandmother illustrating “the old ways of speaking”; as metaphors “obliterated in our modern language” from the “abrasion of habit”— so what does your personal relationship with coolness include other than apologetics? If Proust can recognize Ophelia’s le chant de la nature in ratty furniture, your screaming hoards should be upset you have nothing new to say to them because they’ve been hearing it since the Monkees.

Undoubtedly, Proust would have become frightened if teenage girls shouted at him— he barely made it through the passages from In the Shadow of Young Girls in Flower when he sees a group of them on the beach— but, fortunately, he can find euphoria and depersonalized love in tea and madeleine crumbs, as introduced on page forty-five. Sensing this “powerful joy,” this invasively “delicious pleasure,” this “precious essence” which renders the “vicissitudes of life unimportant” as coming from the tastes of the tea and cake, Proust duly introduces his notion of involuntary memory and suspects he is arriving at his personal truth.

Likening his revelation to a Japanese game of placing bits of paper into a bowl of water until each becomes a recognizable shape, he credits his own cup of tea as revealing himself— assuredly even getting in a coy wink at Arthur with his recollections of “the water lilies on the Vivonne”— to himself. So begins the second chapter, and the proceeding six volumes; I will be reading this through in daily ten-page increments with weekly updates, so this series may never conclude. And I know what you’re thinking. Hey sexxxy.