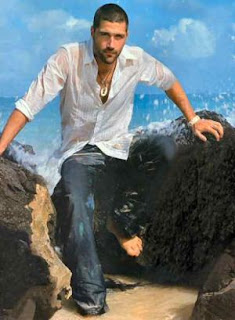 So it's that time again,
It's the time when I rant and rave about LOST, possibly the most exciting and compelling show currently on TV.
I will note I am making that statement before watching the Spanish version of Desperate Housewives, that somebody from Louisiana needs to send me. (I'm not sure if it's real.)

But back to the more pressing matters.
Matthew Fox is one of the stars of LOST, playing Dr. Jack Shepherd, the man with leadership characteristics and a "God" Complex. For this reason, in my house he is frequently referred to as BIG Matthew Fox!!

LOST has been on an incredible run, but Matthew Fox almost didn't score the role of the Doc. Michael Keaton was in talks for the role, but turned it down once he learned how long term it would be.

Mattie has also worked on "Party of Five," but that was ages ago. It's all about LOST now.

QATFYG: Will you watch the Lost finale, this Sunday (May 23rd) at 7 PM on ABC?