there he is again 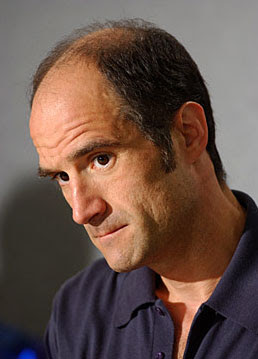 I swear this man - Mr. Elias Koteas - has been in more movies than ANYONE ELSE I HAVE EVER KNOWN. he turns up in everything! everything! Yesterday I saw Shutter Island (which wasn't amazing but not terrible) and guess who shows up in this film. ELIAS KOTEAS- who, here, look at his imdb list and gawk: http://www.imdb.com/name/nm0000480/

He was the blind clockmaker in The Curious Case of Benjamin Button. He also turned up in Milla Jovovich's The Fourth Kind, not sure as what though. And he was in the awful, forgettable The Haunting In the State that Keeps J. Crew Afloat, although his character was interesting. I think every other film I see from this point forward will showcase Mr. Bald Canadian as a coffee table, old woman or warlock. What can't he do! really!

This is, though, not to sidestep what is arguably his best, most notable role to date: Casey Jones (YES) in Teenage Mutant Ninja Turtles. Jones, as you remember (or suppressed until just now) was the badass human friend to the anthromorphized reptiles. cowabunga!

so did you know Elias Koteas existed? shame on you, otherwise!