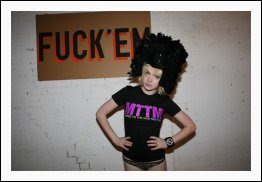 So! Uffie finally released her debut LP / mp3 leak. Let’s talk about that. Some of the other blogs have been saying people are just going to illegally download this with the internet connections they’re stealing from their neighbors instead of buying it— this seemed like fussy cynicism the first several times I skimmed over it, but the Uffie we’ve been becoming acquainted with during the past several years from her singles and pant-less photo shoots is only found on Sex Dreams and Denim Jeans because those same A-sides are included on it. Is this lazy? It might be!

Leading off a new album with the same version of a four-year old song, particularly when it doesn’t sound like the 13 others in either style or content, seems like a curious way to introduce an established artist to a wider audience while simultaneously being a bit patronizing to the people who have been waiting years and years for this album to leak so we they can yawn about and delete it without giving it any kind of chance, so— really, Elektra Records? This was the best you people could come up with?

“Badass bitch, I’m rated X" is still a great line to write on mirrors with lipstick, but I was really hoping for something equally new and fabulous and it wasn’t the “Ready to Uff” remake, “Art of Uff.” Instead of mentioning “I’m ready to fuck / Ready, ready, ready, ready to fuck / I’m Uffie of course / Uffie, Uffie, Uffie of course” like she did on the already reprised “Pop the Glock” single, Uffie goes on and about to again tell her listeners why she’s the Alpha-Uff; although, this time, the playfulness and sorta-irony are lacking, and it comes off as annoying— confidence is attractive, but bragging about it is too much. Even if Uff’s still ready to, she’s just not fuckable right now.

But what’s happening with the rest of the album? This is still only the second track. Although it’s not really a bad album, I’m not really sure why I’m listening to it. Its strongest moments have already been on previous singles (“First Love” b/w “Brand New Car”) and most of the new material sounds like it should be heard in tandem with car commercials as opposed to the cheap beer found at parties in college slums, which is probably what most of her audience was expecting from her proper debut. This album lacks personality!

And now that we have videos of Ke$ha floating about the internet while giggling and digging through piles of trash, this only gets all the worse. Uffie! You’re the pre-Ke$ha. You’re supposed to be the trashy pop star who has some kind of discernable style despite looking like you’ve just fallen out of a closet and you’re music’s supposed to complement this, but I don’t know— most of Sex Dreams might have been ok for circa-1981 Danceteria when everyone was on coke and didn’t know what was happening, but— this album! It’s just not happening. James Murphy has something to say to you.

This is what we’re going to do. This album was never released. We’re pushing back your first LP for another year or two and giving you a new single / mp3 leak for the time being. We’re making two of the new songs, “Give it Away” and “Illusion of Love” into a double A-side, putting “Ricky” on the flip, and you’re going to drink lots of wine between now and then. And no more toss-off Siouxsie covers, that's really lazy.