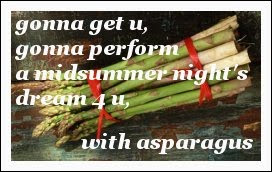 Throughout all of the slums I’ve lived in, for years and years now, I’ve had an aggravatingly delicate plant kept on windowsill after windowsill and never had any idea what it actually was. I’d always thought it was some kind of fern the kitten enjoys taking new growth from, but was just looking up asparagus because asparagus is, again, relatively prominent within pages 100-50; anyway, my window plant is an Asparagus setaceus, an “asparagus fern,” even though it’s not actually a fern! And its needle-like leaves are actually branches called cladodes and the leaves are these weird scale-looking things!

But Asparagus officinalis— actual asparagus— what do you think about that? How many times have you thought about using it as a weapon? Continuously? Francoise, as Marcel finds out years later, has been using it to abuse the kitchen maid, “provoking in [her] attacks of asthma so violent that she was obliged to leave,” which is why she’s had it be a daily part of the family’s meals. The 14-line sentences found in 4-page long paragraphs alongside occasional things like 5 semi-colons before a period is found are becoming extremely tedious and my notebook has become littered with ellipses, but asparagus-centric passages like—

“These celestial hues revealed the delicious creatures who had merrily metamorphosed themselves into vegetables and who, through the disguise of their firm, edible flesh, disclosed in these early tints of dawn, in these beginnings of rainbows, in this extinction of blue evenings (…) when, all night long following a dinner at which I had eaten them, they played, in farces as crude and poetic as a fairy play by Shakespeare. . .”

— are really nice to come upon, especially because this one in particular really off-sets the latent violence the vegetable is also cast as carrying within the spans of only four pages. And if you think Francoise is kind of a bitch for doing that to some poor girl, you’ll be happy to know Leonie comes to obsess upon what “Francoise could be doing and trying to hide from her” at each moment until the two come into a “quarry and hunter” relationship as the neurotic aunt proceeds to insult her as violently as possible. I’m not sure what this may actually mean because, 11 pages earlier, she’s cast as not having even enough energy to reach all the way to her bedside for the rosary. So!

Some pages later, just as Marcel is admiring a novel pink hawthorn bush amidst a hedge of whites— this one is “smiling in its fresh pink outfit, catholic and delicious,” please leave your thoughts about what this may mean in the comments section for a chance to win big prizes— he sees a dark-eyed girl carrying a spade about and, just like the knights in those silly mediaeval romances, he falls in love with her at an instant; an arrow through the eye to the heart.

For him, her name being called by an otherwise anonymous “lady” turns her into a person whereas, only a moment before, she had been “merely an uncertain image” to her young admirer; watching her leave, he laments the “unknown territory” of her life “which [he] would never be able to enter,” then regretting he “had not the time or the inspiration” to either insult or hurt her so he would be remembered. Nevertheless, the name he heard, Gilberte, is far from the last Proust’s readers shall hear of either it or the person to whom it belongs.

Page 148 returns to the hawthorns while the family begins leaving Combray for their home in Paris and Marcel is less-than-pleased, remarking to his flowers “you’re not the ones trying to make me unhappy (…) you’ve never hurt me! So I will always love you,” going on to compare an afternoon moon to a non-performing actress, free to watch the others rehearse while, herself, not wanting anyone to give attention. O.o