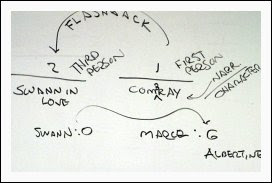 It’s taken 176 pages, though the first glimmerings of the plot have finally shown up! I’m not expecting them to be mentioned elsewhere in this volume, but it’s relieving—it’s so relieving— to know they’re there. I was thumbing through the final volume, Time Regained, in a bookstore last week and happened to find the part where everything comes together for Marcel, because he realizes what it is he’s supposed to write: In Search of Lost Time is about his path to becoming a writer; I’ve never made it past the first half-ish of Guermantes Way, which I abandoned last summer until it occurred to me how I would need to start all over again if I ever hoped to get anywhere with this novel, though it seems these several thousand pages can be summed with wondering: Will he write?

“And these dreams of [Mme. Guermantes] warned me that since I wanted to be a writer someday, it was time to find out what I meant to write.”

— are, as far, perhaps the first with any discernable meaning. Seriously, if you quote this to people, they will sleep with you. Do you know that part in “Blah Blah Blah” where Ke$ha’s like “I don’t care where you live at / Just turn around, boy / Let me hit that”? Someone just economically summarized Proust to her. All of this is probably also going into my writing portfolio.

Anyway! Who is this Mme. Guermantes? Marcel isn’t sure either until being invited to see her at the wedding of Dr. Percepied’s daughter, and he’s immediately disappointed. “It was she!” he exclaims to himself while realizing he had always imagined her as “a material different from that of other living people”; “in the colors of a tapestry” or stained-glass window from another century even though, once seeing her and realizing how she accordingly exists outside of his imagination, she gains an even greater power over it, for such an objective reality reacts to him and says “Glorious since before Charlemagne!” What does this mean? As mentioned above, it doesn’t really matter. Although, much like the Gilberte episode of the previous 50 pages, he immediately comes to love her amid a well-rendered sentence—

Such sentiment may also allude to if not draw together the lesbian scene 25 pages earlier between the late M. Vinteuil’s daughter and her lover. She’s been mentioned earlier as one not holding the highest esteem and, on p. 164, Marcel’s mother remarks how Vinteuil lived and died for her without reward while wondering if it will be found after his death even though “it could only come to him from her.”

Four pages later, Mlle. Vinteuil “chastely present[s] her forehead for a kiss, as a daughter might” amid a “delightful sensation” achieved by the cruelty of robbing M. Vinteuil of his fatherhood, even, as Proust writes, “in his grave.” Her lover is not fond of her father and even displaces an on-looking photo of him, though the scene concludes with his daughter closing the windows’ curtains, for she has the “pleasure of kissing her friend’s face with its smiles and glances” and probably other things, perhaps suspecting a lack of sincerity when speaking of and regarding her father in such a “blasphemous” way.

This is a fairly inebriated section— briefly, Marcel considers Mlle. Vinteuil as not finding sensuous pleasure as a form of evil, but pleasure itself as something “malign”; apropos of nothing, shortly after this, there’s a wonderful sentence where his parents ask he keep quiet, to not ask a certain grocer boy his name, for doing so may “frighten the fish.”