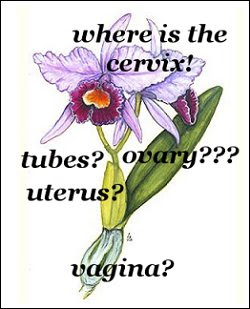 Cattleyas! Odette had a habit of wearing them when first becoming acquainted with Swann, although Proust never mentions anything further about them; this freedom of interpretation is having me feel lost, contextually. Not a single word regarding colour, petals, which particular sub-species that particular evening’s cattelya belongs to which would then inevitably segue into several pages of tangential reverie which could have contained a flourish regarding the orchidaceae family as a whole and how this is directly related to the frescoes painted within a certain chapel, of which he has a certain fondness.

Anyway, cattleyas are regarded as the orchids most evocative of love because, as many flower websites are tactfully insinuating and, as I just updated the cattleya wikipedia entry to note, they look like vaginas even though I’m not really “seeing it” despite, to compare and contrast, looking-up those weird diagrams from fifth grade. Maybe this is like one of those photos of a lamp even though it’s supposed to look like a face? So! Page 195 begins the second part of Swann’s Way— “Swann in Love”— which centers the romance between he and Odette. The phrase “make cattleya” serves as a metaphor which “lived on in their language” as a commemoration to Swann’s habit of always straightening the one she happened to be wearing and, if none was present, having something to chatter about. The same wikipedia entry explains it amid mis-quoting, like you can’t figure it out.

Swann seems to obsess about Odette more than he loves her despite a rather numerous collection of passages to the contrary; somewhat early on, Mme. Verdurin’s painter becomes quite taken with the two being introduced, for “he liked to encourage love affairs,” although the relationship itself seems to leave Odette at times bored beyond words and Swann hopelessly neurotic. Bits like—

“He was afraid the rather banal, monotonous, and more or less permanently predetermined manner she now had (…) would end by killing the romantic hope he had that (...) she would declare her passion, a hope which alone had made him fall in love and stay in love.”

paired with the earlier

“At an earlier time one dreamed of possessing the heart of a woman with whom one was in love; later, to feel one possesses a woman’s heart may be enough to make one fall in love with her”

— are not boding well for him. Odette is flattered by his attention and Proust makes a parenthetical remark that she likes it, though her remarks concerning affection— “that’s all I ever look for”— are said so naturally that Swann is moved.

It seems Odette is one for receiving affection while Swann is happy to give it even though neither of these notions particularly reciprocates their way around. The dreary literature student in me is inclined to think this is dramatized via his search for her after she goes missing for an evening in that she isn’t there for him, though he will not stop an ever-increasingly frantic pursuit: the more of a phantom she becomes, the more he insists upon materializing her.

As he “brushed anxiously against all of those dim bodies as if (…) he were searching for Eurydice,” he wasn’t doing it because “he thought it was possible to find her,” but because he found it “too hard (…) to give up the search.” Happily / unhappily, he happens to bump into her and she “recoiled in fear” from so little expecting to see him amid explaining her disappearance was because of the restaurant not having any seats. To finish with yet another blockquote, Proust writes—

“Other people usually leave us so indifferent that when we have invested in one of them such possibilities of causing us pain and joy, that person (…) is surrounded with poetry [and] turns our life into a sort of expanse of emotion. . .”

As Swann is earlier cast as a fellow whose sensibility is increased by viewing a new sort of beauty despite not finding her physicality in tune with those painted by his preferred artists, another conflict is drawn and, as he recedes away from all other women— having the “imperfection of her body” become synonymous with that of the of the one belonging to the woman whom he, to be simple, loves— Swann nonetheless recognizes this is now the only one capable of “filling him with joy and torment,” though, sigh, the latter comes to take such precedence. This is basically the only thing I remember from the first time I read this book? Summer of 2010, I had such plans for you!